Tom Hunt was a suspect in the murder investigation of his ex-wife, young woman Aileen Greene, in Family Blood (Case #15 of Grimsborough).

Tom is a 35-year-old man with a striped green beanie hat on top of his brown hair. He wears a yellow oversized striped sweater over a long-sleeved gray shirt. It is known that Tom drinks whiskey.

Tom was the ex-husband of the victim, Aileen Greene. He was a poor miserable man who lived in the Derelict Hallway, a disused factory found in the Industrial Area. He initially panicked when the police confronted him, but Jones told him they had come in regards to Aileen's death. Tom was understandably shocked, saying he and the victim had divorced five years previously, and he had only found her again as of recent. The homeless man admitted he still loved Aileen and wanted her to give him a second chance, but claimed she refused his request.

The police returned some time later, about a bag of groceries Aileen had bought. Tom admitted that his ex-wife indeed shopped for him, though he proclaimed she only did it to "rub her newfound money in his face." When he asked if he ever went to her house, Tom denied the accusation, saying Alden Greene was the kind of man who would kill anyone who bothered his family.

Later, the team returned once more, and Jones warned Tom not to give them the runaround any longer, for they knew he spied on Aileen via a telescope placed in a treehouse across from the Greene residence. When asked if he had killed Aileen out of jealousy, Tom denied the accusation, saying he only wanted to know his former wife was happier with the Greene family. He added that she should have been more charitable towards him, considering her newfound wealth.

Though Tom was ultimately acquitted of Aileen's death, he was later found in a delirious state, thinking the player was purple and had wings. When it was discovered that he had inhaled low-quality crack, the team brought Andy Choi to take him to the hospital. The still-intoxicated Tom perceived the doctor's head looked like a tomato, and was tempted to take a bite. Andy politely refused, saying he would bring him to "a vegetable garden." 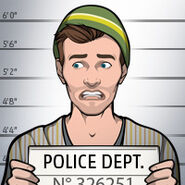 Retrieved from "https://criminalcasegame.fandom.com/wiki/Tom_Hunt?oldid=411257"
Community content is available under CC-BY-SA unless otherwise noted.