Stab wounds to the torso

Tom Blackwater was the victim in The Devil's Playground (Case #36 of Grimsborough).

Tom was a student at Grimsborough University, who had brown eyes and brown hair combed back to a large height. Before his death, he wore a red t-shirt with a yellow pattern and a blue denim jacket with white buttons.

Jones and the player found Tom dressed up like a scarecrow with blood pouring out of his body. They then sent the body to Nathan, who said that Tom had been stabbed with a pitchfork or something similar, which led to fatal blood loss. He had also noted a faint trace of a shoeprint from which he deduced that the killer wore boots.

Whilst searching the Grimsborough Kissing Spot later on, Jones and the player found a a bloody pitchfork. They examined it and found some bloodied fibers. They then sent the clue to Nathan for analysis. The result of the analysis confirmed that the pitchfork was Tom's murder weapon.

Tom had been working for Golden Land, a company that bought agricultural land for railway use, under the supervision of Dylan Cobbs, who had assigned him to try to convince the local Amish community to sell their land. In his immersion though, he started to fall in love with the Amish lifestyle more and more. One day, Hannah Hersberger (the sister of Isaac Hersberger who had witnessed the murder) caught Tom learning Pennsylvanian Dutch and agreed to teach him. From there, despite his reputation as "an a**hole and a womanizer" in the University, Tom fell in love with Hannah and the Amish lifestyle as well. Due to this, he tried to stop Dylan from buying the land, which led to a fight between employer and employee. At one point, Tom confessed to Hannah his original mission. Feeling betrayed, Hannah told him to leave and never come back. She speculated that Tom had snuck in back to the community to meet up with her on the day that he died.

Tom had also learned of Madison Springer's Amish identity while Madison had learned of Tom's original purpose within the community. Thus, they were stuck in a mind game, neither willing to spill the other's secret to protect their own.

The killer turned out to be Hannah and Isaac's father, Ezekiel Hersberger.

The day that Tom snuck back to the community, Ezekiel confronted Tom regarding his relationship with his daughter. Tom then boasted about how much Hannah loved him and that she would choose him over Ezekiel any day. Angered, Ezekiel jumped on a horse and chased Tom down with a pitchfork. Ezekiel strung up the victim like a scarecrow to symbolize that he wanted the non-Amish to stay away. Ezekiel called the outside world "The Devil's Playground" and hated the outside world. He wanted Tom's scarecrow death to symbolize outsiders to be scared off. Judge Hall sentenced him to life imprisonment but allowed him to stay in his Amish clothes as respect for his beliefs. 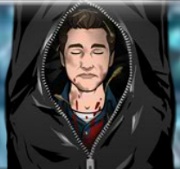 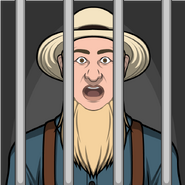 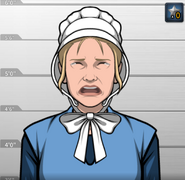 Hannah Hersberger, Tom's girlfriend.
Add a photo to this gallery

Retrieved from "https://criminalcasegame.fandom.com/wiki/Tom_Blackwater?oldid=476649"
Community content is available under CC-BY-SA unless otherwise noted.