Toby Hansen was the killer of Grimsborough University freshman Cindy McMinn in Final Cut (Case #37 of The Conspiracy).

Toby is a 23-year-old Grimsborough University student and the director of Butcher Lake, a student horror film. He has brown hair and sports a pair of black glasses. He is seen wearing a white collared shirt underneath an olive green jumper with yellow and blood orange stripes. Additionally, he is seen holding some documents and has some scratches on his left cheek and on the right side of his neck. It is known that Toby eats chili, is a scuba diver, has hay fever and wears contact lenses.

While Gloria and the player were taking a look on the island where the victim and other students were filming a film there, they heard the strange sounds coming from the trailer. After investigating the sounds, the team found Toby, who was searching for his lost phone there. The team then flagged him as a suspect and asked him about the film in which Cindy was acting, Butcher Lake. When being asked if he had known Cindy was dead, Toby sadly said that Cindy was their star actress, and that it was very hard to find another girl to replace her in the film. In the end of the conversation, the team investigated the makeup trailer after Toby told them that it might help them find Cindy's killer.

Later, after beat cop Mia Loukas reported the team of a fight between him and the chief of landscaping crew Gunnar Burns. The team quickly headed to the university entrance, where they found Gunnar threatened Toby with a pair of hedge clippers for damage to campus property. The team then arrested Gunnar for attempted criminal assault. After Gunnar's arrest, Toby thanked the team for saving his life.

Toby was then spoken to once again as the team found out that Cindy was stressing him out with her insistence that her character, the Final Girl, should be changed. When being asked about this, Toby admitted that Cindy was a "massive pain", as she always did whatever she felt like, such as changing the lines and ignoring his direction. Toby then said that he had to keep Cindy in the film despite not wanting to because no one else could play her role.

Shortly after, the team found out that Toby was Cindy's killer after gaining enough evidence. Upon admitting to the crime, Toby said that Cindy was transferring to another university and that he could not re-shoot the entire student film to replace her without causing major difficulties. He then thought that he might as well kill her, seeing that she was about to leave either way. He then told her to meet him on the campus, where he proceeded to film himself wearing the film killer's costume and slicing her in half with a chainsaw in order to depict the "most realistic death scene in all of horror cinema". Judge Powell sentenced him to 50 years in prison. Toby, sentenced to 50 years in prison for the murder of Cindy McMinn. 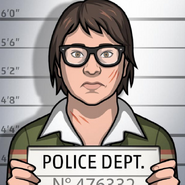 Retrieved from "https://criminalcasegame.fandom.com/wiki/Toby_Hansen?oldid=467463"
Community content is available under CC-BY-SA unless otherwise noted.