Case #52: Head Case (s5)
Tobias Randall was a suspect in the murder investigation of former social worker Zoe Kusama in Head Case (Case #52 of The Conspiracy).

Tobias is a 51-year-old orderly working for Bromden Psychiatric Hospital with long black hair and green eyes. He is seen wearing a blue t-shirt underneath a white coat with a pocket which carries a pair of glasses, a pencil and a pen. He also sports a Grimsborough Psychiatric Hospital badge on his left lapel. It is known that Tobias uses mouthwash.

Tobias became a suspect after Gloria and the player learned that he worked at the psychiatric hospital the victim had been a patient at. When told about the murder, he explained that he had wheeled Zoe down from her room to the courtyard after breakfast. He then suggested that Zoe's tortured soul was now free from her demons. Gloria and the player then rushed to investigate Zoe's room.

Tobias was spoken to again about him branding Zoe a murderer. He told the team that she was nothing but a cold-blooded killer and that murder was murder. He recalled how his little brother had been killed by a "maniac" that had been excused from his crime based on "diminished responsibility". He then told the team that Zoe was friends with Rosamund Wilcox, the Rocket Cow Killer. This prompted them to interrogated Rosamund.

Tobias was found to be innocent after the team incarcerated Louis Leroux for Zoe's murder. 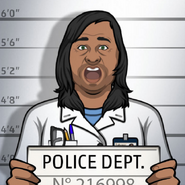