To Hell and Back is a case featured in Criminal Case as the thirtieth and final case of Supernatural Investigations (Season 7) and the three-hundred fifty-second case overall. It is the final one to take place in the South.

Upon arresting the team and arriving in the Netherworld, the demon guard placed them in a cell, where they found demon rebel Arthur Darkwood sliced through by his own sword. The guard, having been instructed by the demon queen to keep both Arthur and the team alive for her plans to rip the veil between the Earth and the Netherworld, told the team to investigate Arthur's murder, allowing Luke and the player to roam around the Netherworld to do so.

During the investigation, the team met the demon Maetheron, who turned out to be the true identity of FBI Agent George Mathison. They found out that Maetheron was tasked by the queen to infiltrate the FBI in order to find Arthur. Upon learning that the team had met Arthur in Oregon, Maetheron under the guise of Mathison came to meet them in Black Ridge to establish a connection with Arthur. Later, the queen passed through the cell, and so the team was forced to hide. Later, Darjeeling, demon Edwinata's hellhound, chased the team before his owner told him to heel. Soon after, the queen's second-in-command, demon Zeke Davis, told the team that he and Arthur used to be in great competition over who would serve as the queen's right hand, with Arthur eventually winning the title and enjoying it for centuries before his betrayal during the demon war. The team then found enough evidence to arrest Zeke for the murder.

Zeke told the team that the queen needed to drink Arthur's blood in order to gain enough power to rip the veil. He explained that he had grown attached to the Earth and its resources during his time there and that he was searching for a way to come back since his banishment. Afraid that the demon's queen's plans would leave the Earth razed with nothing left, he killed Arthur to drain his blood and gave it to Chief Arrow, not knowing that he had pledged loyalty to the queen. Consequently, the demon guard stabbed Zeke for his treachery.

The Chief had given Arthur's blood to the queen, who drank it to transform into her true form right after Zeke's death. After the queen ripped the veil and left to assemble the demon army, the Chief apologized to the team for his betrayal, explaining that he was so desperate to reunite with his wife Lily that he believed that Lily actually lived through the queen. He then told the team that they could still stop the queen's plans if they were able to kill her.

On Chief Arrow's suggestion, he, Ben, and the player searched the queen's throne room for any clues on how to defeat her. There, they found a scroll which (per Felix) contained a prophecy stating that the queen's greatest ally-turned-nemesis was necessary in defeating her, which meant that Arthur was involved by some means. Meanwhile, Hope asked Gwen and the player to search through Arthur's belongings to learn if he had any clue on what Rathimael meant by "there is still hope" in defeating the queen. In the cell, they found Arthur's notes, proving that Rathimael had used some of the demon queen's own life force in creating the five keys (including Hope) and so she needed to be involved in defeating the queen.

After all the events, Felix told the team that he had pieced together the entire prophecy, which stated that Hope needed to take on Arthur's demon form so she could gain his demonic powers to kill the queen. Despite the potential danger, Hope took on the responsibility, drinking water from the River Styx in order to transfer her spirit to Arthur's body, which then changed to her likeness. Hope then faced off against the demon queen, easily defeating her guard and successfully killing the queen and closing the veil as a result. As the queen was the source of power for all demons, all of her faithful also crumbled into dust upon her defeat.

Within the succeeding two months, with supernatural crime rates dropping, the team were able to take their well-deserved breaks, with Gwen finally being able to visit her siblings, give a proper funeral for their mother, and make her relationship with vampire Pierce Cromwell official. The team then went to Paris in order to attend Priya and Zander Stark's wedding, officiated by Chief Arrow. At the reception, Priya introduced the team to her mother, Gita, who still believed that they were all colleagues in a pharmaceutical company. Gwen then told the player to enjoy the night, telling them that they could explore the city of romance the next day.

Zeke Davis
Add a photo to this gallery

Demon Queen
Add a photo to this gallery 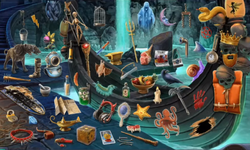 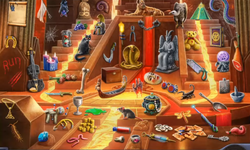 Throne
Add a photo to this gallery

Retrieved from "https://criminalcasegame.fandom.com/wiki/To_Hell_and_Back?oldid=536674"
Community content is available under CC-BY-SA unless otherwise noted.