Timothy is a 25-year-old member of The Higher Truth, a cult. He has light brown hair and green eyes. He is seen wearing a brown shawl over a light blue shirt as well as a pendant.

In his quasi-suspect appearance, he ditches his pendant.

After arresting Reggie Liotta's killer, Gabriel (disguised as a jetsetter) and the player ran into Timothy, who overheard Gabriel's musings about his supposed wealth. Gabriel and the player then helped Timothy find his necklace, who "convinced" Gabriel to join The Higher Truth and took him to meet The Enlightened One. 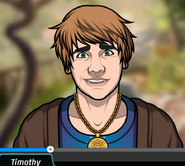 Timothy, as he appeared in No Mercy for Old Men (Case #20 of The Conspiracy). 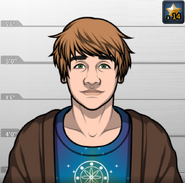 Timothy, as he appeared in Writer's Blocked (Case #21 of The Conspiracy).
Add a photo to this gallery

Retrieved from "https://criminalcasegame.fandom.com/wiki/Timothy?oldid=529164"
Community content is available under CC-BY-SA unless otherwise noted.