Time's Up is a case featured in Criminal Case as the thirty-first and final case of Travel in Time (Season 6) and the three-hundred twenty-second case overall. It is the only case to take place in The End.

Disguised as Cleopatra's guards on the day of Julius Caesar's murder in the hands of Pamiu, Zara and the player went to the gardens in order to find Nefertiti and Ammon Bast and arrest them before they could inflict damage on the normal timeline. There however, they found Nefertiti (as Nebet) tied up with her heart torn out.

During the investigation, the team stumbled into both Pamiu and Cleopatra as they were on the day of Caesar's murder. Later, the version of Jack investigating Caesar's murder stumbled into the present versions of Zara and the player, confusing him and nearly jeopardizing the timeline with a temporal paradox. The team then discovered that Nebet and Ammon had built a futuristic pyramid to serve as their secret base, and that Nebet (as the Goddess Nefertiti) had "prophesied" to Cleopatra regarding her death in a few years' time as well as the prosperity of her descendants. They also found out that Amy had been trying to manage her anger at Nebet for her betrayal of the team, prompting them to flag her as a suspect.

Soon after, the team cornered and arrested Ammon before he could sabotage the time machine. They also learned that Nebet suggested to Pamiu (who knew beforehand that she was a time traveler) to kill Caesar. Later, Ammon escaped from his cell, prompting the team to search for him in the Queen's garden. There, they found Ammon with his heart torn out as well. The team then found proof that Ammon was killed while under the team's custody. Finally, the team found evidence to arrest the Priestess of Ra, Takhat Wabet, for the murder.

When the team went to arrest Takhat, they found her slowly fading away. She revealed herself to be Nebet from the year 2060. While on exile in Wolaniu Island, Nebet became convinced that she needed to rid the world of the Ptolemys, who had gone mad with power. She then traveled back in time to reason with her past self and Ammon. When they would not budge, she killed her past self with a dagger before proceeding to do the same with Ammon after finding Amy's lost badge in the garden. Nebet then asked the team to forgive her before proceeding to fade away completely.

Post-arrest, the team set out to rid 47 BCE of any trace of time traveling. With Nebet's time machine vanishing alongside her, Pamiu arrested by the past version of the team, their past selves soon to merge with their present selves, the team needed to take care of Ammon's time machine, the futuristic pyramid, and Cleopatra's memories.

Jack and the player went to the pyramid and found Ammon's access badge to his time machine. Kai then used the badge to track the time machine to a spot in the market near carpet merchant Yuya's stall. Amy and the player then convinced him to move his stall to give Kai space to work with the time machine. He then told the team he would rig the machine with explosives and transport it to the pyramid to destroy it once and for all.

Meanwhile, Zara and the player went to the gardens to find a fungus that Theo needed to create a memory-wiping concoction for Cleopatra. They sent the fungus to Theo, who turned it into a psychedelic powder to slip into Cleopatra's drink. Zara and the player then brought along Marina (disguised as a soothsayer) to see Cleopatra. They had the Queen drink psychedelic-infused tea before Marina hypnotized her to make her forget about Nebet, to find confidence in her rule, and to anticipate a new lover.

After all the events, Kai had the pyramid implode before telling Amy that everything was taken care of. With their past and present selves successfully merging, the team jumped ahead to 2029. Jack and the player then affirmed that they were in the correct timeline. Amy then briefed Chief Scott regarding their mission in Ancient Egypt. A few days after, the team reminisced about their adventures and recounted what the future laid ahead for them, with the player ready to find new adventures.

Ammon Bast
Add a photo to this gallery

Chief Scott
Add a photo to this gallery 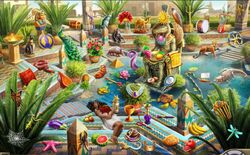 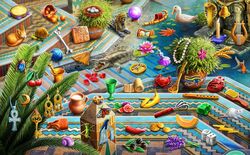 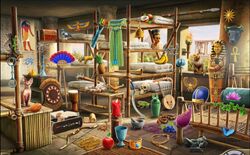 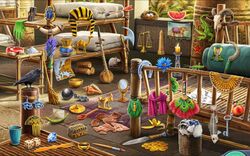 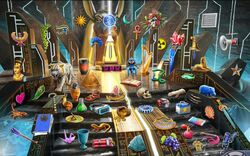 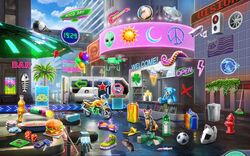 New York City, 2029
Add a photo to this gallery