Jack Archer (Chapters 1‒3)
Leonardo da Vinci (1 task in Chapter 2 & A Stroke of Genius 5)
Kai Malano & Nebet (A Stroke of Genius 5)
Till Death Do Us Part is a case featured in Criminal Case as the fifteenth case of Travel in Time (Season 6) and the three-hundred sixth case overall. It is the final case to take place in Renaissance.

Upon arriving at his workshop with Jack and the player in Florence, Leonardo da Vinci found an invitation to the wedding of King Henry VIII and Lady Fiore de Medici. However, a wedding guest then approached the team, saying that Lady Fiore had been found dead in her changing room. There, they found the King's fiancée shot in the heart.

Mid-investigation, Leonardo deduced that the killer shot Fiore from his workshop with an experimental gun that he had created. Later, a drunk King Henry accused the team of the murder before being taken away by Lady Anne Boleyn. The team then found enough evidence to arrest the wedding officiant, Grand Inquisitor Cardinal Cisneros, for the murder.

Cisneros thought that the extremely beautiful Fiore should not marry anyone out of fear that her "purity" would be tainted. He then shot her with Leonardo's gun so that neither Henry nor anybody else could "have" her. The team then handed him over to Pope Leo X, who excommunicated Cisneros from the Church.

Post-trial, Henry and Anne approached Nebet and the player, asking them to find fabric to fashion a new dress for Anne to wear for her wedding to Henry. They found fabric in the changing room, which Orlando fashioned to a dress for Anne. Upon giving the dress, Anne asked the team to find the Bible of the Pope, who would officiate the wedding, as Henry had hidden it. After the team found the Bible, Nebet said she would deliver it.

Meanwhile, Leonardo asked Kai and the player to find his misplaced mechanical calculator. After the device was found in his workshop, Leonardo and Kai fed their calculations into it and used the results to calibrate his prototype time machine. Kai then gave Leonardo enough time crystals for a ten-minute jump into the future. Leonardo then successfully tested his prototype, meaning that the team could fix their own time machine and go back to 2029.

After all the events, the team attended Henry and Anne's wedding. They then set course for 2029 New York, where the landscape had vastly altered during their absence. 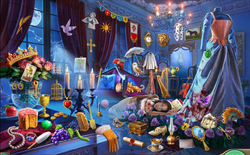 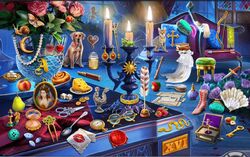 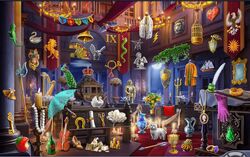 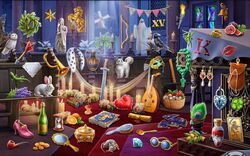 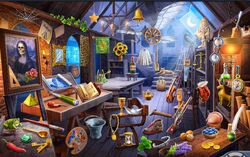 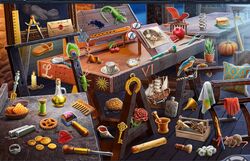 Leonardo's Workbench
Add a photo to this gallery

Retrieved from "https://criminalcasegame.fandom.com/wiki/Till_Death_Do_Us_Part?oldid=537957"
Community content is available under CC-BY-SA unless otherwise noted.