Bullet wound to the nose

Island of the Dolls, Mexico

Tiffany was an enchanted doll disguising as a 10-year-old girl. She had blue eyes, a mole under her left cheek and shoulder-length, wavy blonde hair adorned with a sky blue bow. She wore a mud-stained white blouse patterned with sky blue flowers and sky blue shoulder ruffles. It is known that Tiffany knew how to sew, collected spiders, believed Mexican superstitions and used wax crayons.

Tiffany was spoken to again about her defacing Marigold's pin. She told the team that she had encountered Marigold in front of her house. When Tiffany offered to show Marigold her spider collection, she freaked out and called Tiffany a stupid child.

In the end, it was proven that Tiffany was Marigold's killer. She revealed that she was a doll that had been brought to life upon the arrival of her "grandfather", José Carvallo, on the island. She then said that she had "seen into" Marigold's rotten heart, which she did not like. She thus chopped Marigold up with a machete. Tiffany then tried attacking the team, only for Gwen to gun her down. 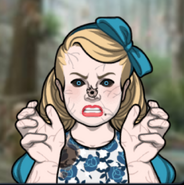 Tiffany, shot in the nose and scattered into pieces when she attempted to attack the team during her arrest for the murder of Marigold Carson. 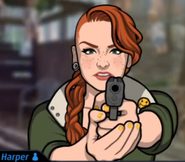 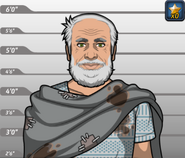 Retrieved from "https://criminalcasegame.fandom.com/wiki/Tiffany?oldid=541162"
Community content is available under CC-BY-SA unless otherwise noted.