Thomas Moulin was a suspect in the murder investigation of rally driver Nomena Leroy in Going the Distance (Case #41 of World Edition).

Thomas is a 54-year-old French rally racer. He has short brown hair under a blue cap with a logo for "Red Ball" and stubble. He dons a crimson and white racing uniform with his sponsors for the race on it. It is known that Thomas is knowledgeable about snakes and drinks champagne.

Thomas became a suspect after the player and Carmen found his blood on a spike strip at the jungle pit stop. Carmen was personally excited to meet him, but managed to get past her excitement and informed him of the murder. He explained the spike strip was for the De Brills racing team, but it was meant as a joke since all the teams do this sort of thing.

Thomas was spoken to again about a video interview he made after the race saying the victim would have died anyway if she drove in the race. He said every year there was some accident or some problem, and the 3R Race was no place for a woman. Carmen was shocked that he was such a misogynist, and wondered how far he would go to stop them. Thomas felt the spike trap would be enough, and that his career was far from over despite what everyone else was saying.

Thomas was found innocent after the team incarcerated Lavinia De Brills for Nomena's murder. But he was spoken to by the player and Michelle Zuria about the stolen diamonds found in an African mask, with his sweat on it. He panicked saying he did it because he expected Lavinia would restore his career if he moved them. He also explained that Lavinia's contact in The Bureau would pick up the diamonds, which meant that she knew the identity of the mole. They ran back to headquarters immediately, but unfortunately they got word from Carmen that Lavinia had been murdered. 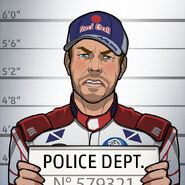 Retrieved from "https://criminalcasegame.fandom.com/wiki/Thomas_Moulin?oldid=531237"
Community content is available under CC-BY-SA unless otherwise noted.