Thomas is a 45-year-old American journalist for Wolf News. He has white hair and dons a white-collared shirt with a bulletproof vest and a Wolf News badge. It is known that Thomas eats couscous, goes fishing, uses Buzzer and smokes.

Thomas found himself in trouble after the player and Carmen found a microphone with his fingerprints on it in the protest square. When Carmen asked Thomas if the news he was covering regarding the protest movement involved Hamza's death, Thomas said he would never leak any details of a story before it was broadcast. Though Carmen tried to snap some sense into him, Thomas did not budge, then Carmen warned him he would be arrested for obstruction and he gave the details. He said he had an interview with the victim to discuss the protests against the Sultan, and admitted he admired the guy and his fight for liberty.

Thomas was interrogated again regarding an article he wrote saying the Sultan killed Hamza. When asked for evidence, Thomas said he did not give proof; he just wrote whatever he could sell. He also pointed out how it was making headlines all over the US and that he was in the running for a Pulitzer. Carmen pointed out how what he was doing could make thing worse, Thomas explained all he was doing was reporting on the situation like any good journalist.

At the climax of the investigation, the evidence pointed towards Thomas as Hamza's killer. Thomas denied involvement first but soon admitted to the crime. Thomas and Hamza had arranged an interview about the latter's protest movement at the oasis, where Hamza handed Thomas his rifle because the journalist wanted to get a feel for it. When Thomas grabbed the weapon, it accidentally fired on Hamza, killing him. Thomas then seized the death to create a news story in which he blamed the Sultan for it. Judge Adaku sentenced him to 10 years in prison.

Ingrid congratulated the team for putting Thomas behind bars and preventing the Sultan from carrying out a massacre of his own people. Now that the murder investigation came to a close, The Bureau would focus on Chief Ripley's murder. Carmen suggested they talk to Thomas due to his being a reporter. Thomas had an interview with a protester, who said that The Sword was "the blade who will cut down the foreigners." The journalist had ignored it at first, but then heard The Sword being mentioned quite a few times from protesters whispering that they had given them orders. Carmen suggested that the player try to find some clues at the protest square to see if The Sword was really in contact with the protesters. 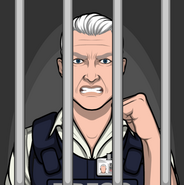 Thomas, sentenced to 10 years in jail for the murder of Hamza Boussefi. 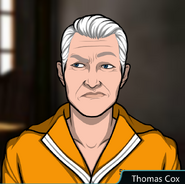 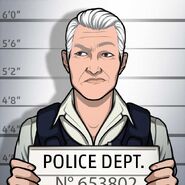 Retrieved from "https://criminalcasegame.fandom.com/wiki/Thomas_Cox?oldid=408934"
Community content is available under CC-BY-SA unless otherwise noted.