Thomas Boedeker was a suspect in the murder investigation of quarterback Troy Takiguchi in Dead Man Running (Case #34 of Grimsborough).

Thomas is a 22-year-old football quarterback for the Wippeka Armadillos standing 6 feet, 2 inches tall of German heritage. He sports spiky black hair which is spiked back and up towards the side. He has blue eyes and wears black make-up on his cheeks under his eyes. He has a thin, barely visible beard connecting to a moustache. Thomas is seen wearing heavy shoulder pads with the Armadillos logo on the side of them. On top of his shoulder pads, he wears a heavily padded football shirt with a white collar on it. On his left side of the shirt, under the logo, he has a grass stain presumably earned through falling on the pitch. Thomas' number on his football t-shirt is 05. It is known that Thomas eats spicy food.

Thomas was called into the investigation soon after Jones and the player found his mouthguard next to the body of Troy Takiguchi, who had collapsed onto the pitch during an important Major League football match between his team, the Quails, and Thomas's team, the Armadillos.

When asked why his mouthguard was found near the victim's body, Thomas answered to the team that that was because he was hot on Troy's heels after Troy had managed to slip by his entire team. Thomas then continued that he rushed to Troy once the victim collapsed onto the field and that Troy's arm was bulging into an immense and unnatural size. Thomas concluded that he was not liable for Troy's death as he would never risk his own career just to get rid of another player, and that he had a lot of respect for the victim as he was his only equal.

Thomas was later interrogated for a second time after the team discovered about the rumors of him using steroids. Thomas claimed that he had worked hard to be fit and that he was proud of it. He continued to state that he was against steroid use because it was illegal, cheating and low. He then concluded that those rumors got spread because it was the easiest way to destroy an honest player's career.

Thomas was found innocent after Franklin Caldwell was indicted for the murder.

Thomas, as he appeared in the Chapter 3 cover of A Shot of Beauty (Case #45 of Grimsborough).

Thomas, as he appeared on a cover of Sports Weekly amidst over magazines in Drive, Swing, Die (Case #46 of Grimsborough). 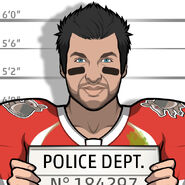 Retrieved from "https://criminalcasegame.fandom.com/wiki/Thomas_Boedeker?oldid=408925"
Community content is available under CC-BY-SA unless otherwise noted.