There Will Be Blood is a case featured in Criminal Case, appearing as the fifty-sixth case of the game as well as the city of Grimsborough. It is the final case set in Grimsborough and the Airport district.

Upon receiving a letter from the Crimson Order instructing them to go to the woods, Jones and the player went to a picnic site-turned-construction spot in the woods. There, they found the body of Aloki Indian Delsin Peota, scalped to death with a death threat to the player carved onto his body.

During the investigation, the team once again asked Aloki shaman Anakee for help in investigating a 1643 Pilgrim feast. Soon afterward, Nathan found out that Delsin was killed in a secret gold mine in the city, which the team found and discovered to be the Crimson Order's headquarters. In the mine, they found an execution order for Adam Bentley, issued to Chief King by Serena Johnson, prompting the team to arrest her. During her arrest, Serena spilled that it was the Crimson Order who killed Delsin.

Later, the Crimson Order hacked the television network in the city to offer a reward in exchange for the player's head so they could complete their plans. Shortly after, upon Anakee's instructions, the team dug at the construction site, only to uncover the mass grave of the Aloki Indians massacred after the pilgrim feast. The team concluded that Delsin's discovery of this mass grave was the reason behind his murder. The team then found Cathy King's hairs on the victim's scalp, forcing them to hold her in custody as a serious suspect in the murder. The team then finally found enough evidence to arrest Milton Grimmes as Delsin's killer and the Crimson Order's leader.

Milton immediately confessed to the murder, and detailed how his ancestor, Solomon Grimmes, seduced and married Inaya so he could organize a feast to gather all the Aloki Indians under one roof and kill them all (scalping Inaya in particular) in order to gain control over the gold mine in their territory, which would eventually be the birthplace of the Crimson Order. Declaring that he had the power to declare who lived and died in the town, Milton pointed his gun at the player, only for Ramirez to come in and knock him out with a frying pan. The team then handcuffed Milton, who despaired over how he was supposed to bring the player's head during their ceremony that night.

The team then infiltrated the Order's headquarters as Crimson Order members and arrested Mayor Howard Johnson and Alden Greene, who were participating in the ceremony. The team then proceeded to the "trial of the century". In court, Judge Hall profiled Milton and his family as Crimson Order leaders and mass murderers. She also incriminated Serena in the murder of Adam Bentley, charged Alden of gold laundering and killing Rachel Priest for the Crimson Order, and reprimanded Mayor Johnson for abusing his power under his mother's orders. Judge Hall then sentenced all four to life imprisonment in solitary confinement, condemning the Order's violent ways and taking comfort in the end of the city's dark days.

Post-trial, Anakee asked Jones and the player to help find proof of Aloki ownership over the Order-controlled lands. The team then found Aloki paintings in the gold mine, which (per Grace) was suitable proof of historical ownership over the lands. The team presented the proof to Anakee, who thanked the player for helping vindicate the Aloki before vanishing into thin air. The team then found Anakee's soul in the area, who said that she was called by many names through the years and that she represented the voices of the Aloki tribe. Due to the player's actions, the Aloki souls at unrest were now appeased, and so now she could join the ancestors as well.

After a while, the player informed the team that they accepted a position in the Pacific Bay Police Department. On the day of departure, Cathy asked the player for help in investigating something that someone had slipped into her purse. The player found it and restored it, revealing it to be a farewell card from Cathy and the rest of the GPD. The team then threw the player a farewell party, reminiscing over the player's experiences in Grimsborough before the player departed for a new city.

Cathy King
Add a photo to this gallery 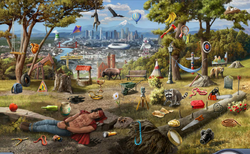 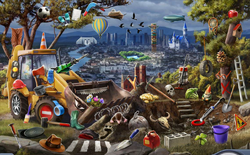 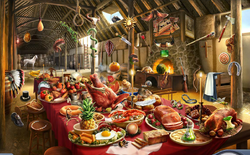 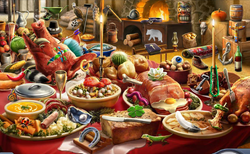 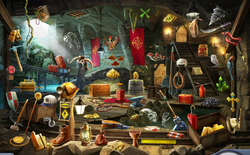 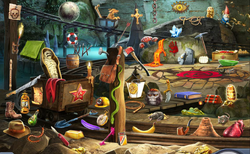 Wagon Rail
Add a photo to this gallery

Retrieved from "https://criminalcasegame.fandom.com/wiki/There_Will_Be_Blood?oldid=487478"
Community content is available under CC-BY-SA unless otherwise noted.