Theodosia Hayhurst was a suspect in the murder investigation of mobster Joseph Dante in Overkill (Case #22 of Mysteries of the Past).

Theodosia is a 67-year-old apothecary. She has grey hair and wears orange rimmed glasses. She wears a white apothecary's coat with a green caduceus badge, her coat also consists of a pocket containing two test tubes. It is known that Theodosia has insomnia.

Theodosia became a suspect after the player and Maddie found a device she prescribed to the victim to restore his virility. As for the victim himself, she said him and his cohorts would frequent her pharmacy, and she does not discriminate, serving Irish and Italians alike. With that said, Maddie and the player decided to look around the apothecary for more clues.

Theodosia was spoken to again about her medicine vials, one of which contained belladonna, which was used to poison Joseph. She said that belladonna has a long history of medicinal and cosmetic uses aside from its poisonous properties, exemplified by the ladies from the brothel, who use it to look more seductive. When Maddie kept pressing her on the issue, Theodosia said she was a professional, and would not sell or use such a substance so recklessly.

In the end, Theodosia was found to be innocent after the team incarcerated Madam Xiang for Joseph's murder. 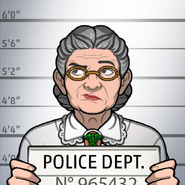 Retrieved from "https://criminalcasegame.fandom.com/wiki/Theodosia_Hayhurst?oldid=415369"
Community content is available under CC-BY-SA unless otherwise noted.