Theodore Watson, appearing as a minor character in Criminal Case, was mentioned during the events of Death Without Parole (Case #25 of Mysteries of the Past).

Theodore had a mustache and used to wear a shirt underneath a pair of overalls.

Theodore had been murdered prior to the events of the game. According to Catastrophe Joan, Rose—who was a bounty hunter at the time and was investigating the murder—had relentlessly beaten Theodore's brother Randolf, whom she believed to be the criminal, until he was forced to admit that he had murdered Theodore with a pickaxe in the gold mine, getting him jailed as a result.

With Joan accusing Rose of beating a confession out of Randolf, Isaac and the player went to investigate the gold mine, and unearthed a human skull. Per Dick, the skull belonged to Theodore and its wound was consistent with a pickaxe, thus proving Rose's hunch to be true. With Theodore's murder solved, the team denied Joan's version of the story and saved Rose's reputation, although her methods were questioned. 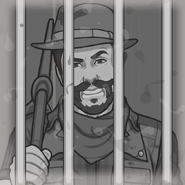 Randolf Watson, Theodore's brother and killer.
Add a photo to this gallery

Retrieved from "https://criminalcasegame.fandom.com/wiki/Theodore_Watson?oldid=408939"
Community content is available under CC-BY-SA unless otherwise noted.