Theodora Hecate, appearing as a minor character in Criminal Case, was mentioned during the events of Ashes to Ashes (Case #55 of Grimsborough).

Theodora was a Pilgrim woman who lived in the 1600s in colonial Grimsborough and sported a Pilgrim woman's suit and a Pilgrim bonnet around her long, wavy hair, which happens to be the same hairstyle her descendant, Luna Hecate, sports.

Theodora was Luna Hecate's ancestor, but she was only mentioned in one moment during the investigation of Tess Goodwin's murder.

Moments before Mary Goodwin was executed, Claire Bell and Mary had a brief discussion in which Mary hid her notes somewhere in the docks and asked Claire a favor to retain those notes and keep it within the Bell family until the time was right. The team was interested in Mary's notes, and Constance Bell was fortunate enough to hand it out to the team. The team used forensic powder to reveal Mary wanting to know the leader of the Crimson Order through Theodora Hecate, since Theodora knew the identity of the leader, but was very good in keeping secrets. This caused the team to initiate conversation with Luna at the dark forest about the Crimson Order's leader in spite of Luna not willing to out any information about the Crimson Order's leader as the leader was the one who made the Order's decisions.

Although Theodora was only mentioned and did not appear in flashbacks, Luna knowing the leader's identity but refused to out the information made it obvious that the team was getting very close to putting an end to the Order. 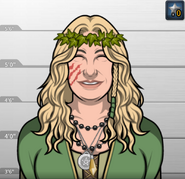 Luna Hecate, Theodora's descendant.
Add a photo to this gallery

Retrieved from "https://criminalcasegame.fandom.com/wiki/Theodora_Hecate?oldid=409240"
Community content is available under CC-BY-SA unless otherwise noted.