Theo Zane was a suspect in the murder investigation of skincare entrepreneur Beckett Blanton in Buzz Kill (Case #16 of The Conspiracy).

Theo is the 32-year-old owner of the Hustle & Guzzle coworking cafe. He has brown eyes and shoulder-length black hair under a black hat with a tie-dyed band. He wears a blue sweater with a tie-dye print and a white badge that reads "Hustle & Guzzle". It is known that Theo drinks kombucha, has a coloring book and rides a bike.

Theo became a suspect after Gloria and the player found his cat in the coworking space and returned the cat to him. Theo said that he ran the place, and so Gloria asked him about Beckett. Theo said that Beckett was in there all the time, working on his start-up company. Theo was shocked when he was informed Beckett had been murdered, saying that he never knew Beckett was in any form of trouble.

Later, the team found Beckett's answering machine with multiple messages from Theo begging Beckett not to sue him. Theo said that Beckett wanted to sue him for negligence, saying that his belongings had been stolen after leaving them unattended while getting coffee and energy balls. When Theo asked him if he simply misplaced his stuff, Beckett angrily shouted that he would sue Theo for negligence, saying that he spent more time on his coloring book than running the place.

Theo was found innocent of the murder when the team arrested Beckett's business partner, Prisha Chandra, for the murder. 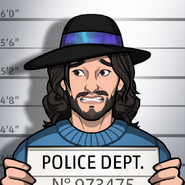 Retrieved from "https://criminalcasegame.fandom.com/wiki/Theo_Zane?oldid=408946"
Community content is available under CC-BY-SA unless otherwise noted.