The Ties That Bind is a case featured in Criminal Case, appearing as the one-hundredth case of the game and the forty-fourth case of Pacific Bay. It takes place in Rhine Canyon, a district based in Pacific Bay.

Previously on Criminal Case, Colonel Spangler pleaded with the Pacific Bay Police Department to meet up with him at the hippie festival in Rhine Canyon. The player asked Frank to accompany them, and upon arrival in the festival, Spangler was burnt to death.

Since Hannah found out that she wrote a memo to Spangler to meet up with her at the oasis, Chief Marquez was treated as a suspect even though she claimed she only wanted to talk to Spangler and had nothing to do with his death. Frank and the player found a Molotov cocktail in the last minute, giving them enough evidence to arrest Pearl Montana for the murder of Colonel Spangler.

When Pearl admitted that she killed Spangler, she claimed that she discovered the alien cave. However, Spangler told Pearl to keep her discoveries secret to keep civilians out. Pearl believed the Colonel wanted to take credit for her discovery so she caught Spangler by surprise, tied him up, and threw a homemade Molotov cocktail to off Spangler with an explosion. Judge Dante sentenced her to life in prison.

Amy wanted to help Chief Marquez believe she was not a liar all those years ago. Chief Marquez wanted Randolph to know that she was the 6-year-old girl he saw 36 years prior to the events of this case. Chief Marquez was getting close to settling her past, but felt that she needed to protect Randolph from violence, now more than ever.

Pearl Montana
Add a photo to this gallery 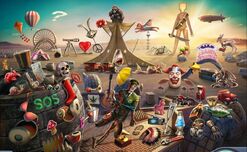 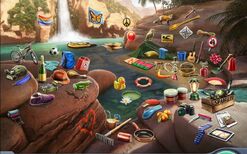 Cave Entrance
Add a photo to this gallery

Map to the Stars: Part 6

Retrieved from "https://criminalcasegame.fandom.com/wiki/The_Ties_That_Bind?oldid=499485"
Community content is available under CC-BY-SA unless otherwise noted.