Maddie O'Malley (All Chapters)
Isaac Bontemps (All That Glitters... 2)
The Talking Dead is a case featured in Criminal Case as the eighth case of Mysteries of the Past (Season 4) and the one-hundred seventy-ninth case overall. It takes place in the Elysium Fields district of Concordia.

Previously, the team discovered that possible thief Diego del Lobo had been invited to Mr Alastor's second soirée, a séance at the Concordian Museum of Art. After Evie informed them of a murder there, Maddie and the player went to the museum garden, where they found socialite Philomena Highmore with her throat slashed and staged on a Bernini statue.

Mid-investigation, Lady Highmore, Philomena's aunt, left the crime scene to return to her estate, taking pieces of evidence with her among Philomena's possessions. Later, beat cop George Blanton tried to arrest Diego for art forgery. The team then found enough evidence to arrest medium Ignatius Cottingley for the murder.

After denying the charges, Ignatius said that he killed Philomena. He said that Philomena found out all the tricks he used as a medium to fake conversations with the dead. Fearing that she would expose his fraud during the museum séance, he paused the event, followed her into the garden, and slashed her throat with an obsidian knife. Judge Takakura sentenced him to 25 years in prison for the murder and for conning the public.

Meanwhile, Lady Highmore summoned Maddie and the player and asked them to look into Mr Alastor's parties. She said that Philomena was invited to the next party, so the team searched her bedroom and found her diary, which said the third party was taking place in a chocolate factory. The team then informed Lady Highmore of their findings.

After the events, Commissioner Talmadge Baldwin ordered the Squad to leave the parties alone. Determined to go to the third party however, Maddie and the player found Philomena's invitation in her bedroom. Noticing that the diamond ticket had her name however, the cops offered Diego freedom from custody in exchange of him forging the ticket. After the offer was fulfilled, they headed to the chocolate factory party despite discouragement from the Commissioner. 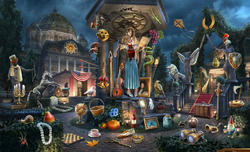 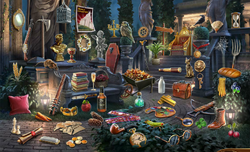 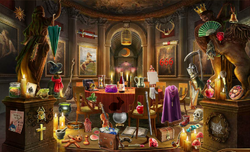 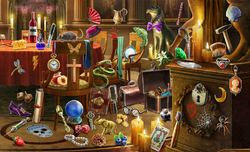 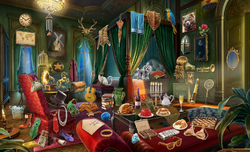 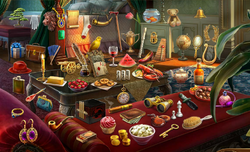 Sitting Area
Add a photo to this gallery

Retrieved from "https://criminalcasegame.fandom.com/wiki/The_Talking_Dead?oldid=533638"
Community content is available under CC-BY-SA unless otherwise noted.