The Show Must Go On

Jean-Philippe Delacroix (All Chapters)
Carrie James (Walk on the Wild Side 1)
Eleonora Macaron (2 tasks in Walk on the Wild Side 1)
The Show Must Go On is a case featured in Criminal Case as the sixth case of City of Romance (Season 8) and the three-hundred fifty-eighth case overall. It is the first one to take place in the Attraction district of Paris.

Given that Carrie was still reeling from meeting her long-lost brother Cody and that it was Hugo's day off, High Commissioner Delacroix opted to join the player in their investigation. The duo headed to the Popotin Rouge at Montmartre to investigate an alleged animal smuggling ring, only to find the head cabaret dancer, Sabine Diamant, crushed by a boa constrictor in a water-filled snake tank.

Mid-investigation, the snake wrapped around High Commissioner Delacroix, but he was luckily rescued by animal handler Rémi Roy. Later, the team had to stop the owner of the Popotin Rouge, Jacques Lelarge, from holding a show and compromising the crime scene. The team then found enough evidence to incriminate Lelarge himself in the murder.

Lelarge said that he was being blackmailed by Sabine to give her a raise or that she would leave the cabaret, which would make him lose customers. He agreed to her terms in hopes of mollifying her, but he then caught wind of her plan to use the money to eventually establish her own cabaret with the Popotin Rouge's dancers. To prevent the loss of 40 years of maintenance of the Popotin Rouge, Lelarge pushed her by surprise into the snake tank while she was rehearsing her opening act. Judge Lebrun sentenced him to 40 years in prison.

Post-trial, after briefly interrogating Rémi, High Commissioner Delacroix and the player found a safe in the cabaret containing ledgers with Lelarge's fingerprints, possibly linking the cabaret to animal smuggling. While being interrogated, Lelarge blurted out that Sabine may have been involved, prompting the team to search her room. There, they found an animal smuggling crate with the address "81 rue Cortot" placed on it.

Meanwhile, Carrie and the player talked to Eleonora Macaron, who explained that her boyfriend, Cody, only recently felt safe to contact Carrie because Antoine Macaron had him followed after they first inquired about him. Afterwards, they made plans for the three of them to watch a Popotin Rouge show together, crafting a disguise for Cody so he could be hidden from Antoine.

After all the events, the team confirmed that the crate in Sabine's room was used to illegally transport a baby cheetah. High Commissioner Delacroix then instructed the team to investigate the apartment where the crate was addressed to once the search warrant would come through in the morning.

Grégoire Ewan
Add a photo to this gallery

Cody James
Add a photo to this gallery 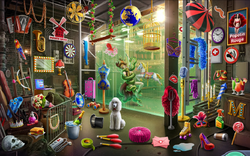 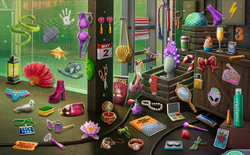 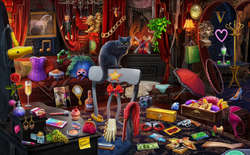 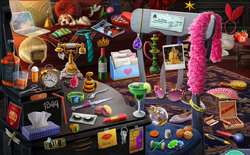 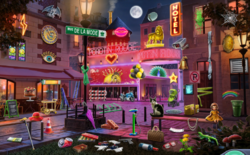 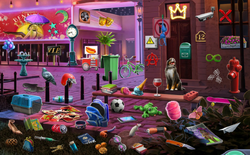 Street Bench
Add a photo to this gallery

Retrieved from "https://criminalcasegame.fandom.com/wiki/The_Show_Must_Go_On?oldid=547794"
Community content is available under CC-BY-SA unless otherwise noted.