The Secret Experiments is a case featured in Criminal Case, appearing as the twenty-first case of the game as well as the city of Grimsborough, and the final one to take place in the Financial Center district.

Carl Ackerman, the former cameraman of the CCN reporter Rachel Priest, reported to the police that Rachel was missing. The team then went to Grim News Headquarters and found her journal that said she was heading to an abandoned warehouse. After they reached there, they saw a trapdoor which led to an underground experiment lab. There, they found a skeleton melted in vat acid and a smashed skull, which was then identified as Rachel's skull. After collecting enough evidence, the team found out that the killer was the district's most powerful and influential man they met before and the CEO of Greene Industries, Alden Greene.

Rachel had discovered that Army General James Marsh was secretly developing a super soldier serum, which promoted excessive bone growth and turned men into war machines. Though once the army learned of his dangerous human test trials, they ordered James to stop. However, the general continued the project with funding from Greene PharmaCorp.

Towards the end of the case, James was also found guilty of assisting in Rachel's murder. When Alden was arrested, he explained to Jones and the player that Rachel had come to their secret lab, unaware they were waiting for her. The tycoon admitted she was correct about the serum, which would have made him the most powerful man in Grimsborough, and that he could not allow her to expose his plan. General Marsh ordered the inquisitive journalist's death, and Alden complied by injecting her with the super serum, knowing it was only made for men. Rachel's skin was torn apart from the resulting bone growth and she soon perished. Afterwards, Alden and James placed her corpse in a vat of acid to hide the truth from the authorities.

As a result of Alden's testimony, James was also arrested and both men were taken to court, where Judge Hall sentenced both of them to life imprisonment. After Greene and Marsh were sentenced, Jones felt that Rachel died for a just cause, refusing to believe that people of high status could be excused from their crimes, and that the law is above even CEOs and high-ranking military officials.

Later, in Chief King's office, the Mayor admitted he was stunned by the exposed truth, and realized that the player performed a lot better than he imagined. And as a result, he decided to promote the player to patrol the Historical Center.

Kelly Speltz
Add a photo to this gallery 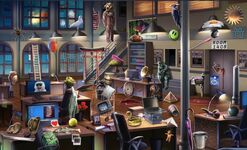 Alden Greene's Desk
Add a photo to this gallery

Retrieved from "https://criminalcasegame.fandom.com/wiki/The_Secret_Experiments?oldid=532713"
Community content is available under CC-BY-SA unless otherwise noted.