The New Truth! is a case featured in Criminal Case as the fifty-fifth case of Mysteries of the Past (Season 4) and the two-hundred twenty-sixth case overall. It is the first case to take place in the Capitol Peak district of Concordia.

Six months after Justin Lawson's inauguration as mayor and his abolition of the free press, his newspaper The New Truth had proven to be merely a mouthpiece for his regime. Furthermore, the militia he formed, the Justice Corps, had gained the power to arrest anyone who spoke against his regime and had gained control of the Concordian Police Department as well. To avoid getting shut down, the Squad resolved to make him think that they were following him while protecting the people from the regime's cruelty discreetly. The now-eight months pregnant Maddie and the player then went on their daily patrol of the streets, where they found Judge Takakura with his head bashed in.

Mid-investigation, Mayor Lawson told the team that he was going to preside over the case himself once the killer was caught. Later, the victim's childhood friend, Yuri Ishida, demanded that courthouse clerk Florence Samuels give her Takakura's gavel, which was courthouse property. Soon afterwards, Inspector Jaubert of the Justice Corps said that Takakura was suspected of conspiracy against the regime, but had to be released upon lack of evidence. Eventually, the team found enough evidence to arrest Florence for the murder.

Upon admitting to the murder, Florence revealed that Lawson was her idol and that she was in love with him. When she heard Takakura accuse him of being a merciless monster, she reported him to the Corps, but they were forced to let him go. Taking matters into her own hands, she waited for him while he was going home from work and proceeded to bash his head repeatedly with a hammer until he died. Disgusted that she would commit an assassination in his name, Lawson sentenced Florence to death by beheading at the town square the next day at noon, marking the first death sentence in fifty years.

Resolving to prevent the death sentence, Maddie and the player talked to Diego, who said that negotiation was fruitless and thus suggested a prison break for Florence. Diego and the player decided to go to the courthouse to find a prison map, which they proceeded to do. He then devised a prison break plan for Rose and the player, which they showed to Chief Wright, who approved of the plans without hearing the details. He also said that they were to send Florence to the Redcliffe penal colony in Australia, where she would serve a custodial sentence and carry out manual labor. They then found a prison guard uniform before telling others of the plan.

Meanwhile, Katherine Woolf told Maddie and the player that she and Takakura were members of a resistance against Lawson's regime. She asked the team to go to his house to recover a telegraph machine containing a message that would incriminate dozens of members. After the team recovered the telegraph, the player accompanied Charlie in talking to Katherine, where he offered to build a private telephone line for the resistance.

After all the events, Rose and the player successfully carried out the prison break plan, sending Florence to Australia. Finding out about the plan however, Lawson informed Chief Wright that he was not going to shut down the Squad for their treason because of all their past work, but he was going to revoke some of the Squad's privileges. He then told Chief Wright to fire Diego and sever all ties with him or the Squad would be shut down. Shortly thereafter, Diego said that he would leave and told the team not to come looking for him. Now with one less member, the Squad resolved to turn the tables on Lawson soon.

Chester Holt
Add a photo to this gallery

Justin Lawson
Add a photo to this gallery 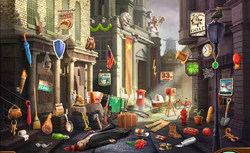 Courthouse Statue
Add a photo to this gallery

Start a Discussion Discussions about The New Truth!