The Murder of Napoleon

The Murder of Napoleon is a case exclusive to Criminal Case: Travel in Time, where it serves strictly as an introductory tutorial.

After a time disturbance was reported in 1804 Paris by Chief Scott, Jack and the player headed there to retrieve the dead body of Emperor of France Napoleon Bonaparte, who was found stabbed in the stomach. After gaining enough evidence from a lab analysis, a witness testimony, and a left-behind clue, the team arrested general Lafayette, for the murder. Team coordinator Amy Young thus deemed the player prepared enough to take on a time disturbance in Ancient Egypt, 47 BCE, in Cleopatra's palace.

Lafayette
Add a photo to this gallery 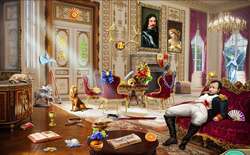 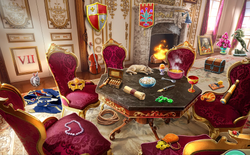 Baroque Table
Add a photo to this gallery

Retrieved from "https://criminalcasegame.fandom.com/wiki/The_Murder_of_Napoleon?oldid=539139"
Community content is available under CC-BY-SA unless otherwise noted.