The Hunted Hunter is a case featured in Criminal Case as the twenty-eighth case of Supernatural Investigations (Season 7) and the three-hundred fiftieth case overall. It takes place in the South.

Upon arriving in the Floridian swamp in order to find Chief Arrow, Luke and the player found Gwen's mother, supernatural hunter Dolores Harper, impaled by swamp vines. The team took in Gwen as a suspect due to her finding the body first.

Mid-investigation, the team discovered that Dolores was last seen alive in the Masuka Mart Truck Stop, where a sinkhole opened shortly after the team arrived. Later, Gwen uncharacteristically lashed out at vampire Bathsheba, believing her to be the killer. The team then found enough evidence to arrest powerless witch Morgana Blackhawk for the murder.

Morgana admitted that she had approached a group of demons so she could gain demonic powers. The demons then demanded proof of loyalty, bestowing upon her just enough power to do so. She then chloroformed Dolores and used her given demonic powers to impale Dolores with some swamp vines. With her newly-obtained powers, Morgana knocked the team out and teleported to the Netherworld.

Post-trial, Luke and the player asked swamp monster Gregg if he had seen Chief Arrow pass through the swamp. While he was uncertain, he allowed the team to look around the swamp, where they found the Chief's bandana which (per Priya) proved that he had met up with good demon Arthur Darkwood. Darkwood told the team that he tried talking the Chief out of pursuing the demon queen alone, but the Chief had already pledged allegiance to the demon queen, most likely out of grief for his late wife.

Meanwhile, the player helped Gwen's sister Tilly Harper find their mother's diary, which (per Felix) proved that Dolores was struggling to reconcile with her daughters. The team then showed Dolores' diary to Gwen in order to cheer her up. After all the events, the player accompanied Gwen in going to the swamp in order to properly say goodbye to her mother. There, Gwen's ex-boyfriend Pierce Cromwell (who had earlier appeared to assist Tilly and the player) met up with, comforted, and got back together with her. Gwen and the player then decided to help Gregg, who was annoyed at the couple for displaying their love because his girlfriend had left him. There, they found proof that Gregg's girlfriend did not break up with him, only leaving him to attend a supernatural being gathering in Mississippi with the goal of defeating the demons.

Reconvening at the team's base, Arthur told them that he was invited to moderate the gathering. Gwen then asked Tilly to go back and stay with their brother while they were en route to Mississippi as it would become more dangerous from then on. The team then prepared to head off to the gathering.

Sam Ellis
Add a photo to this gallery 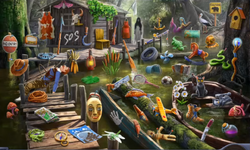 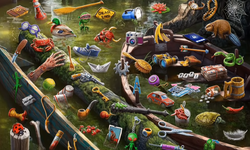 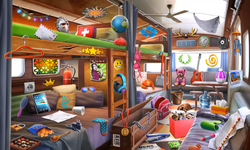 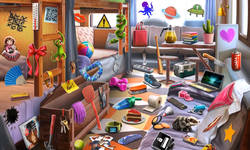 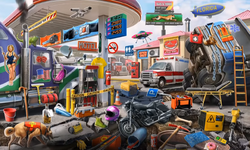 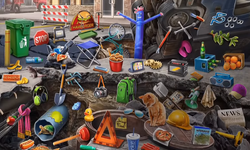 Sinkhole Rubble
Add a photo to this gallery

Retrieved from "https://criminalcasegame.fandom.com/wiki/The_Hunted_Hunter?oldid=531707"
Community content is available under CC-BY-SA unless otherwise noted.