The Hanoi Sisters (Vtn: Chị em Hà Nội) appeared as a pair of suspects in the murder investigation of acrobat Annie Capri in Death at the Circus (Case #52 of Pacific Bay).

The Hanoi Sisters are 29-year-old Vietnamese-American conjoined twins who work at Paradise Circus. They wear a specially-made red and gold stage outfit with make-up of the same colors. It is known that the sisters eat shaved ice, use chalk and read Tarot cards.

Amy and the player first spoke with the sisters after finding a message they wrote to the victim. Amy jumped when she first saw them saying she had never seen conjoined twins before, but they were fine with it and said they are used to it. When asked about the message, they said they sent it because they were teasing her and that the victim was full of herself. The sisters argued over who said they were jealous, but Amy stopped them saying if they were revealed to be the killer, the both of them would go to jail.

The sisters had to be interrogated again when they came forward with information about Annie's killer. They said the killer may kill again if they are not caught soon, and that the killer went to the wax museum. Amy said that the police did not rely on fortune telling and told the sisters they would speak with them soon. When asked about why they suddenly want to help the investigation, they said they wanted the killer caught before they kill again. Amy asked if they saw anything unusual at the circus, but it lead the two of them to argue with each other again. Amy asked if they knew that Annie was trying to leave the circus, they replied saying that no one is supposed to leave.

After Mikey Bolero's incarceration, they were approached again by the player and Judge Dante after they found out about their background. Analysis from Hannah revealed that the sisters were sold and bought by the circus. Judge Dante offered to help them, but they said they were fine at the circus and that it was the only place people look at them in awe and excitement. However, they said they did not like being paid very little and that whenever they would complain about it, the ringmaster would just lock them up in a cage. When Judge Dante asked why they did not report him, they said they had no proof and they may risk losing their jobs. This prompted Judge Dante and the player to investigate the circus to find proof of the ringmaster's bad treatment. 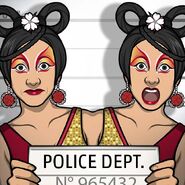 Retrieved from "https://criminalcasegame.fandom.com/wiki/The_Hanoi_Sisters?oldid=492187"
Community content is available under CC-BY-SA unless otherwise noted.