The Ghost of Murders Past is a case featured in Criminal Case as the tenth case of Supernatural Investigations (Season 7) and the three-hundred thirty-second case overall. It is the final one to take place in the Southwest.

Luke and the player headed to Devilman's Bridge in Amarillo, Texas to stop oil tycoon R.J. Fielding from being possessed by the ghost of Abigail Riley and committing murder under her influence. Once there however, they found Fielding tied upside down to a cactus and left to asphyxiate to death.

Mid-investigation, Hope intercepted a police transmission saying that Greg Schmidt had escaped from the psychiatric hospital, forcing the team to search for him. Later, TrendVidder Ronnie Hawk announced the upload of a pre-recorded interview with a ghost, going against his earlier claims that he had not encountered Riley in the abandoned house. Soon after, FBI Agent George Mathison placed Chief Arrow under arrest. The team then found enough evidence to arrest artist Axel Bross for the murder.

Axel admitted to being in love with Riley even after her death. Thus, when Riley asked him to kill Fielding, he obliged, knocking him out with chloroform and suspending him upside down like the tarot card "The Hanged Man". He then detailed that Fielding, Jesse Adams, Justine Bankston, and the three other people that Riley had driven to suicide had summoned a demon. Unexpectedly, it worked, with the demon promising them knowledge in exchange for Riley's life. The six continued on with the ritual, killing Riley and gaining knowledge on the location of reservoirs of natural resources, leading to their successes in the oil, copper, and gold industries, respectively. Riley then appeared, demanding that the team let Axel go. When the team refused to back down, Riley possessed Luke's body and ran away with Axel, threatening to shoot Luke if they ever followed him.

Felix and the player then talked to George, telling him that they needed Chief Arrow to save Luke from possession by a ghost. Still skeptical but promised by the team that he could charge them with whatever he wanted if they were proven false, George fetched Chief Arrow. The four of them then went to the abandoned house and found proof that Riley and Axel may have escaped to the museum gardens. The team then showed up at the museum, with George placing Axel under arrest. Felix then conducted the exorcism, driving Riley away from Luke's body.

The still-shocked George then took Chief Arrow and the player to Axel to ask him for help in appeasing Riley's spirit. Axel then said that she needed to be reminded that someone had loved her when she was alive so she could truly find peace. On Axel's directions, the team went to the abandoned house and found a ring that Axel had given Riley when she was alive. The team then went to Riley, who explained that she saw it fit that the punishment for her friends who watched her die was to watch their loved ones die. They then gave the ring back to Riley, telling her that Axel wanted her to find peace. Finally convinced, Riley then passed to the other side.

Meanwhile, the player joined Gwen in confronting Justine about her dark past. After apologizing and still feeling guilty over Riley's death, Justine told them that they had summoned the demon with help from a spellbook from a local witch. With Priya's help, the team then prepared a sample of cattail pollen paste to give to the witch. They then went to Agnes Leek, who told them that the demon was likely still roaming around Earth. She then said that demons were unkillable, unbanishable except by another demon, unimaginably powerful (having powers like teleportation), and that they could disguise themselves as human beings.

After all the events, the team concluded that the livestock deaths in the Southwest were probably caused by the demon summoned by the group of six five years prior. Hope then told the team that she had gotten an email telling them to stop looking into demons, which she had traced to the Rockies. The team then went there to find out more about the email sender.

Greg Schmidt
Add a photo to this gallery

Abigail Riley
Add a photo to this gallery 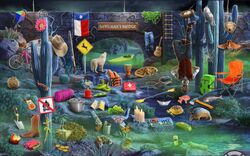 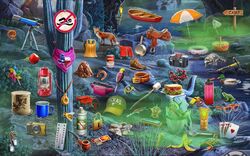 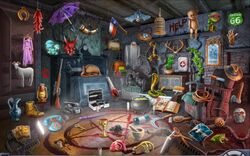 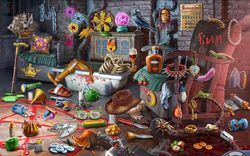 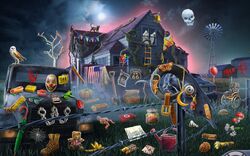 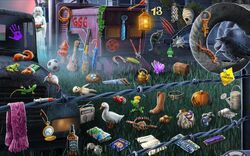 Rusty Truck
Add a photo to this gallery

Something Wicked This Way Comes (5/5)

Start a Discussion Discussions about The Ghost of Murders Past