Maddie O'Malley (All Chapters)
Charles Dupont (All That Glitters... 5)

That Sinking Feeling is a case featured in Criminal Case as the eleventh case of Mysteries of the Past (Season 4) and the one-hundred eighty-second case overall. It takes place in the Elysium Fields district of Concordia.

Maddie and the player boarded the Gigantic before its maiden voyage for Mr Alastor's fifth party in order to investigate Giulietta Capecchi's involvement, only to find the body of artist Theo Vergeer with his skull smashed.

Mid-investigation, there were reports of gunfire on board, which turned out to come from a flare gun demonstration. Later on, William Fox, captain of the ship, stoked up the engines, causing the team to believe the ship was going to set sail. The team gathered enough evidence to arrest the victim's apprentice, Renée Daucourt, for the murder.

After denying involvement, Renée admitted to the crime. After being mentored by Theo, Renée had managed to surpass his talent. Theo then forged her paintings in order to keep his glory. When Renée confronted him, Theo threatened to break her ticket and prevent her from going to Paris. Angered, Renée smashed Theo's head against an ice sculpture's head. Judge Takakura sentenced her to 20 years in jail.

After the trial, Maddie and the player interrogated Giulietta about Mr Alastor. She said that a person she believed to be Alastor had sent her love letters, which they found at the ship's deck. Per Evie and Diego del Lobo, the letters were written by George Buchanan, who was obsessed with Giulietta. At first, George showed care about Giulietta's honor and admitted he was Alastor, but he then retracted. George was placed in custody.

Meanwhile, Charlie and the player warned William about his discovery that the Gigantic had a slight chance of sinking. Maddie and the player then bade farewell to her cousin Rose and her baby Maggie, who were boarding the ship for the maiden voyage.

Later, Evie reported that Alastor had sent a car to the pier. Inside the car, they found a congratulatory note from Alastor. Percival Gordon, his driver, said that Alastor was impressed with their work and invited them to the last soirée.

After Chief Wright freed George and Giulietta due to the lack of solid evidence, the Squad prepared to go to the last soirée in Alastor's mansion to unmask him once and for all.

Renée Daucourt
Add a photo to this gallery

Percival Gordon
Add a photo to this gallery 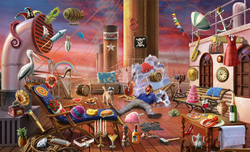 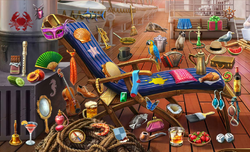 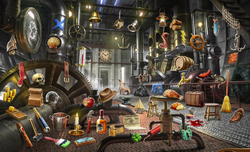 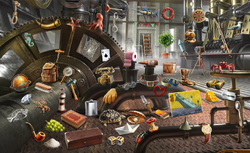 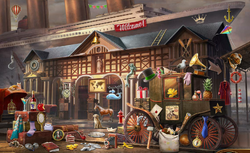 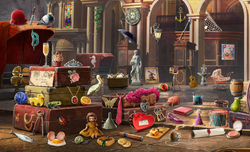 Passengers' Luggage
Add a photo to this gallery

Retrieved from "https://criminalcasegame.fandom.com/wiki/That_Sinking_Feeling?oldid=480744"
Community content is available under CC-BY-SA unless otherwise noted.