Thaddeus is the 56-year-old now-former commissioner of the Concordian Police Department. He has brown mutton chops and brown eyes. He dons a dark blue waistcoat over a white shirt with a dark blue tie. He also wears a black bowler hat with the department's badge and a black cape with a gold chain.

In his first suspect appearance, it is known that Thaddeus knows The Nutcracker and eats charcoal.

In his second suspect appearance, he dons a purple coat over a white shirt, a yellow waistcoat, and a patterned gray cravat. It is discovered that he is a marksman, plays golf and eats pork ribs.

Post-investigation, Chief Wright introduced the player to Thaddeus, the new Police Commissioner. He praised the player for their impeccable reputation and, aware that he had big shoes to fill after the death of Commissioner Baldwin, felt confident that the Mayor had made the right decision appointing him to office. Chief Wright then offered Thaddeus a tour of the airship.

After arresting Patricia Rochester's killer, Isaac and the player requested Thaddeus's help in taking the Rochesters down. After being told that the Rochesters had their political opponents admitted into Gryphon Sanctuary, he asked for proof of their misdemeanors. While they didn't have any proof, Isaac said that their involvement was obvious. Despite this, Thaddeus assured them that he would keep his eye on the Rochesters.

Thaddeus became a suspect after Isaac and the player found his opera glasses at the scene of the murder. He revealed that the glasses were a gift from the Rochesters, who were much lovelier than the Squad had led them to believe, which irritated Isaac. He then revealed that they were investigating Marta's murder, which prompted Thaddeus to tell them that he had seen her earlier that night in order to congratulate her, certain that she'd want salutations from someone as important as himself. He then left to get back to work.

Thaddeus was spoken to again about a bouquet of roses he had given to the victim. He explained that he had fallen in love with her when he saw her perform The Nutcracker several years ago and went to the opera to make a grand declaration of his love. However, Marta told him that he wasn't good enough for her, sending him into a state of disbelief.

Thaddeus was found to be innocent after the team incarcerated Henri Monplaisir for Marta's murder.

After arresting Archie Rochester's killer, Chief Wright and the player interrogated him after they realized that he had promised the Rochesters the Squad's support at the inauguration of the new republic. He revealed that he had joined the Rochesters' side as he preferred to be on the winning team. He assumed that Chief Wright would have supported him as he was romancing Bernadine Rochester. Chief Wright then told him that he would report him to the Deputy Mayor, to which he threatened him that his team should watch their backs. Later on, Justin informed the team that Thaddeus had been fired.

Thaddeus became a suspect again after the player and Isaac found his golf bag at the golf course. When they approached him, he thanked them for firing him as it gave him all the time to play golf. However, Isaac informed him that he was under arrest, having found evidence that he accepted a bribe from Malcolm Rochester to release Eleanor Halsted from prison. And although he wa shocked to hear of Cornelius' murder, Thaddeus claimed he was innocent, but regardless Isaac and the player took him into custody.

Thaddeus was spoken to again by the player and Maddie about a photo of the Mayor, which he pasted a picture of his own face on top of. He said that someone with his superior abilities would be capable of becoming Mayor. However, those chances were ruined after they had him fired from his job as Police Commissioner. But when Maddie suggested he killed Mayor Castletown, Thaddeus did not even bother to give a response.

Despite his crimes, Thaddeus was found innocent after the team incarcerated Eleanor Halsted for Cornelius' murder. 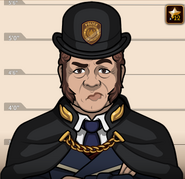 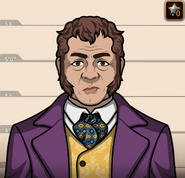 Thaddeus, as he appeared in Arrow of Injustice (Case #54 of Mysteries of the Past). 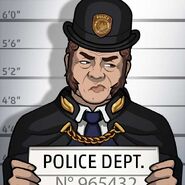 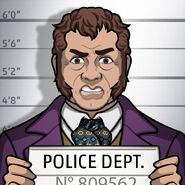