Teddy Brooks was a suspect in the murder investigation of DJ Kalua Kaboom in Murder on the Dance Floor (Case #15 of The Conspiracy).

Teddy is a 36-year-old musician from London. He has brown hair and black eyes. He wears a patterned black suit with red buttons on a white shirt with black buttons. Additionally, he sports black glasses and a brown wooden bow tie. He is also seen holding a guitar. He is known to eat waffle pops, use a Kameroid 260, and take Scrappy Snacks.

Jones and the player first talked to Teddy after finding his composition of a song that trashed Kalua's music. Teddy said that Kalua's songs were barely music, explaining that her music merely offered a "short-lived pleasure with minimal flavor." Teddy then said that his compositions were more cerebral and even offered to play the cops a tune, but the cops quickly left.

Later, Jones and the player found a record of a song by Teddy and Kalua. Teddy said that the two of them were in a rather successful band before she decided to go solo, gaining her a lot of fans while he could not even get a single gig. He even tried promoting himself through social media, but even that could not work, so he started fearing for his financial well-being.

Teddy was found to be innocent when the team arrested partygoer Robyn Ash for the murder. 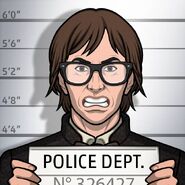 Retrieved from "https://criminalcasegame.fandom.com/wiki/Teddy_Brooks?oldid=408915"
Community content is available under CC-BY-SA unless otherwise noted.