Ted Esquire was a suspect the murder investigation of science-fiction actor Rex Logan in Star Crime (Case #35 of Pacific Bay).

Ted is a 34-year-old movie director. He has black hair and wears spectacles over his dark brown eyes. He dons a purple t-shirt underneath a beige-colored plaid coat, accompanied by a badge symbolizing an infamous cult. He also wears a gold chain necklace, a direction badge, and carries a direction megaphone. Other than that, he has an acid burn on the left side of his neck. It is known that Ted uses talcum powder.

When Amy and the player find the clapperboard they analyse it and find the director, Ted, Ted was the director of "Warzone Pacific", the film Rex Logan and Daniel Lambert were starring in. Ted had to be questioned as it was felt that he ought to know what was happening on his set. During questioning, Ted claimed that he was "just a pawn" and he did not know anything of value. He explained that "Warzone Pacific" was his first film in Ivywood. In the end it was the producers who decided everything, Amy explained he was not being informative enough to which Ted explained he knew nothing about it. He said the last time he saw Rex was in the costume workshop. Amy and the player leave to go search the costume workshop.

Later on the player finds a broken camera, they fix it and then send it off to Hannah, she shows the recording left on the camera which showed Rex performing a scene, then Ted stopping the scene because Rex was not performing from the script, Rex then tells Ted that his film is lacking greatness which it should have, saying he is bringing said greatness. Ted looses his temper and says that he is just an actor and tells Rex if he goes off script one more time he will fire him. Rex explains that he cannot because he is the star and he has not the power. Amy suggests that they go speak to Ted immediately. When Amy confronts Ted she asks him why he did not tell the player previously. Ted explains that Rex was impossible to work with. He would disrupt and it would be impossible to finish the film on time with Rex constantly disrupting. Ted reveals that he had to use talcum powder to stop him from sweating so much. He asked the producers to replace Rex but he said that Rex was right and that Ted was the one that could be replace and not Rex.

Ted was then found innocent for murdering Rex Logan, as it was then revealed it was his co-star Daniel Lambert. 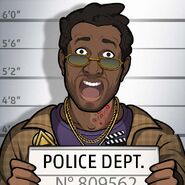 Retrieved from "https://criminalcasegame.fandom.com/wiki/Ted_Esquire?oldid=409237"
Community content is available under CC-BY-SA unless otherwise noted.