Tāo Wèi (Chn: 魏滔) was a suspect in the murder investigation of his fiancée, Chinese immigrant Ling Zhang, in Heartless (Case #11 of Pacific Bay).

Tao is a 35-year-old gangster with messy black hair and sports a facial mustache. Tao has a dragon tattoo and wears a burgundy tuxedo with a black tie, a dark brown scarf with golden dragon printing, as well as a dark brown coat. He also wears a red rose on the right side of his jacket. It is known that Tao is a gambler, drinks vodka and practices acupuncture.

Tao found himself in the red when Hannah found fingerprints (forensically dusted) from a baseball bat used to vandalize the Moloko Bar belonging to Tao. Amy started to worry since Tao's actions possibly ignited a war between the Russian and Chinese communities, but Chief Marquez told the team to approach Tao cautiously since she did not want the feud to escalate at a more violent level.

Amy accused Tao of grand vandalism but Tao said he did it for the greater good since the Russian community wanted Ling dead. Tao said that he was supposed to marry Ling in an arranged marriage but afterwards, Amy fined Tao for vandalism.

Tao was interrogated a second time after Yann analyzed a red envelope concluding it was used as a vehicle for a wedding with Ling—something that worried Amy as Tao would be unhappy if he knew about Ling's secret wedding with Piotr Golovanov. Tao was flat broke because he threw all his life's savings for his arranged wedding to Ling, not to mention he tried cooking, acupuncture, jean-pressing, but Tao did not impress Ling at all—which made Amy fear that Tao killed Ling since she violated tradition.

Tao was found innocent after the killer was incarcerated for grand homicide, but he was eyeballed by the police force since he was likely to cause greater trouble following murder court. A torn poster angered Tao and the team found it (in Little China) with no difficulty. The player pieced the poster back together, forensically dusted the message only to reveal something worse than the Russo-Chinese Feud—Inner Chaos, to be behind Tao's anger.

Amy informed Tao that Inner Chaos was behind the poster, infuriating Tao since he recognized the group as an anarchist organization fighting for a borderless society. Amy wanted to ensure Tao would not cause any more trouble and Tao reluctantly agreed. 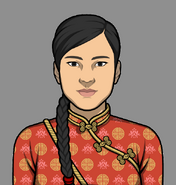 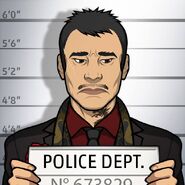 Retrieved from "https://criminalcasegame.fandom.com/wiki/Tao_Wei?oldid=413797"
Community content is available under CC-BY-SA unless otherwise noted.