Tangzi Khatun (Mon: ᠲᠠᠩᠽᠢ ᠬᠠᠲᠤᠨ) was the victim in Fountain of Death (Case #27 of Travel in Time).

Tangzi was the eldest wife of General Subutai. She had brown eyes and long black hair tied into braids with crimson bands. At the time of her death, she donned a turquoise kimono with ochre lining over white wraps. She sported pink lipstick, blush, silver earrings and two wooden necklaces, the smallest of which has a silver pendant. Additionally, she wore turquoise slippers.

Tangzi's body was found with an arrow in her chest in front of the silver tree fountain. Janis determined that Tangzi had died from an arrow to the heart. She found traces of meat and vegetables on the arrow and determined that they came from boodog, a traditional Mongolian dish. This led Janis to conclude that the killer ate boodog.

Jack and the player found a quiver of arrows in the fountain mechanism. They dispatched a sample of hair on the quiver to Theo, who determined that the hair came from a horse. This led Theo to conclude that the killer rode horses.

After reinvestigating the fountain mechanism, Jack and the player found a bow. They sent a sample of sweat from the bow to the lab. There, Theo analyzed the sample and concluded that the killer was male.

Tangzi's husband was General Subutai. Subutai viewed Tangzi as his most beloved wife and gave her his sword to use when he was away. Another of Subutai's wives, Yangdai Khatun, cursed Tangzi's womb as she was jealous of the fact that Tangzi had given Subutai two children. Merchant Ayanchin often met with Tangzi when he made deliveries at the palace; Tangzi once refused to pay him when she claimed that his animals were substandard and told everyone in Karakorum that he was a swindler. Slave Wu Ming got into a fight with Tangzi when he attempted to escape, and French goldsmith Guillaume Boucher argued with Tangzi when she tried to make changes to his design of the silver tree fountain.

The killer turned out to be Ayanchin.

After a particularly bad winter that took his good animals, Ayanchin was fired by Tangzi before she started badmouthing him, causing him to lose even more business. He had begged Tangzi to stop, but Tangzi said she would report his inadequacy to Ogedei Khan. Fearing the Khan would behead him, Ayanchin shot her with an arrow. Ogedei then banished Ayanchin from Karakorum. 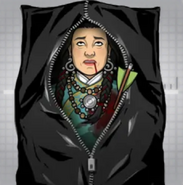 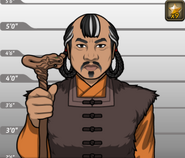 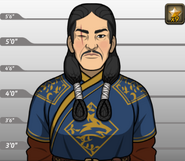 Tangzi featuring in Fountain of Death's teaser.
Add a photo to this gallery

Retrieved from "https://criminalcasegame.fandom.com/wiki/Tangzi_Khatun?oldid=534800"
Community content is available under CC-BY-SA unless otherwise noted.