Tamu is a 32-year-old bartender with dark skin, a shaved head, and brown eyes.

In her first appearance, Tamu works for The Kraken. She wears an orange tank top with blue and white patterned linings. She wears a golden tentacle necklace and golden hoop earrings. Additionally, she sports red lipstick and white eyeliner. It is known that Tamu went to GrimCon, drinks Incredible Bulk cocktails and takes vitamin D supplements.

In her second appearance, Tamu is seen wearing a yellow shirt with black linings and triangle patterns on the collar and the sleeves. She also sports red lipstick and a pair of golden hoop earrings. It is discovered that she takes Saved by Flowers.

Tamu became a suspect after Jones and the player learned that she knew the victim. After being informed of the murder, she revealed that the victim was liked by all, and that the only bad thing that he had done was get drunk and break one of her chairs.

Tamu was spoken to again about the curse that she had put on the victim. She explained that the victim had a crush on her that led to him attempting to grope her.

Tamu was found to be innocent after the team incarcerated Haruki Kato for Marcus' murder.

Tamu became a suspect again after Jones and the player learned that she was the bartender at the bar where the victim had died. When questioned about her disappearance, she explained that she had gone to get napkins and straws for the bar, and was detained when she tried to return to the counter. When asked if she had seen any suspicious customers, she said that none of the arrivals seemed notable.

Tamu was found to be innocent again after the team incarcerated Shane Redfern for Dolores's murder. She was spoken to again by Jones and the player about Mayor Joe Warren. She revealed that the Mayor was a frequent flyer and was at her bar earlier that day. She told them that he acted nervously and was fiddling with a USB key that he had mistakenly left behind. This prompted the team to reinvestigate the bar. 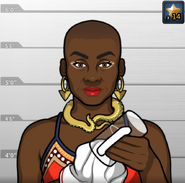 Tamu, as she appeared in Color Me Murdered (Case #22 of The Conspiracy). 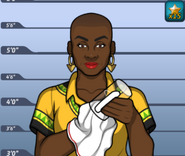 Tamu, as she appeared in Dearly Departured (Case #49 of The Conspiracy). 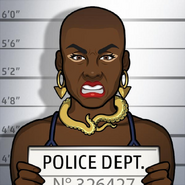 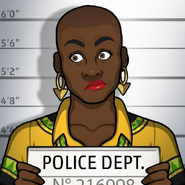 Retrieved from "https://criminalcasegame.fandom.com/wiki/Tamu_Wanjiku?oldid=492169"
Community content is available under CC-BY-SA unless otherwise noted.