Tamra Johnson was a suspect in the murder investigation of director Margaret Hatchman in Deadly Legacy (Case #36 of Pacific Bay).

Tamra is a 25-year-old African-American beauty technician who specializes in fingernails at Ashley's Salon. She has brown eyes and long black hair, and is seen wearing pink eyeshadow and sports a pink star tattoo on her left cheek, blue earrings, a blue bracelet on her left hand, a pink and blue star necklace and a silver necklace with her name "Tamra" on it. She wears a pink tank top with an "Ashley's Salon" tag on it. It is known that Tamra drinks wine.

Tamra was brought into the investigation when Amy and the player found an appointment sheet that the victim had filled out for a nail appointment, thus making Tamra a suspect.

When the team questioned Tamra, Tamra said that she found Margaret "crazy" and thought that she thought the world revolved around her. According to Tamra, she bragged about her fame and fortune, which Tamra was used to. However, Margaret got very personal and started stating that Margaret had done something with her life and would "leave a mark on the world", whereas Tamra "wouldn't even leave a footprint". Tamra held in her anger and even pitched a film idea to her, but Margaret mocked her and laughed at her.

Tamra was questioned a second time when the team found her ticket to see the premiere of "Legacy", that she ripped up and later regretted it. She said that she was not that bad and she was under a lot of pressure. Amy was surprised to hear this, but did not believe her. Tamra said she was too hard: after Margaret had broken down in front of her, Tamra offered her wine to Margaret, but she did not drink any, and the latter thanked Tamra and gave her the ticket. Tamra said that she was the one to be pitied and not her. Amy still did not believe her and asked if Tamra was just saying this to not raise suspicion, Tamra said that she was not and was genuinely sad.

Tamra was then found innocent after it was revealed that Tobias Frankenberger was found guilty for murder. 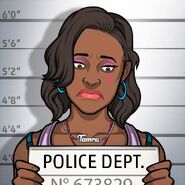 Retrieved from "https://criminalcasegame.fandom.com/wiki/Tamra_Johnson?oldid=468914"
Community content is available under CC-BY-SA unless otherwise noted.