Tammy is the 40-year-old nanny to Andrew Kamarov. She has shoulder length brown hair with curls at both sides, and brown eyes. She wears a blue cardigan over a plain white shirt. The blue cardigan has golden bows around the collar, and a multi-colored spiral lollipop can be seen protruding from her right shirt pocket. It is known that Tammy eats Russian stew, uses chalk, and gets manicures.

Tammy was called into the investigation when Nikolai Kamarov waltzed in the Pacific Bay police station complaining about the abduction of his son, Andrew. Tammy claimed she had done some chalk drawings with Andrew before he was abducted due to Tammy not keeping an eye on Andrew at all times. Since Nikolai was full of high expectations, Tammy had to do her best to ensure Andrew would live a righteous life as opposed to Nikolai, but knew about Nikolai's intimidating behavior of this sordid affair.

Tammy was interrogated a second time after the team found her wallet with Andrew's immunization record (which the player forensically dusted to reveal Andrew's lack of immunization from childhood diseases). Since Andrew was not vaccinated against chicken pox, polio, influenza, and MMR, Amy deduced Andrew to be in the red since each child is supposed to have these vaccinations at a certain age. Tammy knew Odette neglected Andrew's lack of vaccination albeit she also refused to let Tammy vaccinate Andrew against those childhood diseases--a reason why Nikolai had to hire Tammy due to Odette's negligence arising from Odette ending her career due to the birth of Andrew. Tammy's discussion with the police proved to be nothing but lies once evidence incriminated Tammy as the one who committed the premeditated murder of Odette Kamarov through the unlawful use of a controlled prescription.

Upon arrest, Tammy admitted she viewed Odette as a bad mother because Odette refused to allow vaccinations to be administered to Andrew arising from Odette's beliefs that her ballet career ended due to her giving birth to Andrew. Tammy had enough of Odette's negligence, so she rigged Odette's coffee with blood thinners before Odette consumed her cup. One day Odette came to Tammy to pick Andrew up from school wanting to play Mommy for once but, after she consumed her coffee, she felt ill. Tammy seized Andrew so she could give Andrew the treatment Odette never gave him. Tammy wanted to make sure Odette was dead, and after she confirmed it, she took Odette's jacket, wrote the words "Evil Woman" on it, and displayed it to make Inner City aware of Odette's mannerisms. Amy wanted to know where Tammy held Andrew, so Tammy told Amy that Andrew was safe in her apartment. Andrew was then found inside Tammy's apartment, but he wanted to know where Tammy was, but Amy told Andrew she and the player were present to send him back to his father.

In court, Tammy told Judge Dante the reason for the murder was to ensure Andrew was properly treated (starting with immunizations, found in Tammy's wallet), but alas, Judge Dante was confident (in spite of Nikolai's mental instability) that Nikolai could find a nanny with no criminal record, and therefore, Judge Dante gave Tammy a lifetime jail sentence with no eligibility for parole.

While Amy thought Tammy attempting to give Andrew immunizations was thoughtful of her, Tammy killing Odette was inexcusable. 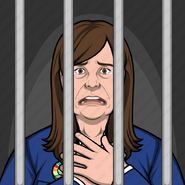 Tammy, sentenced to life in jail without parole for the murder of Odette Kamarov and for the alleged kidnapping of Andrew Kamarov. 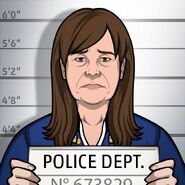 Retrieved from "https://criminalcasegame.fandom.com/wiki/Tammy_Baker?oldid=408902"
Community content is available under CC-BY-SA unless otherwise noted.