Sveta Rasputina (Rus: Света Распýтна) was a suspect in the murder investigation of civil notary Mikhail Karamazov in Only Truth Remains (Case #14 of World Edition).

Sveta is a 42-year-old psychic. She has long black hair with few signs of whitening. She wears a red blouse and a golden choker. She is also seen holding a red crystal ball. It is known that Sveta plays piano, has contact with a Borzoi and eats caviar.

Sveta became a suspect after the player and Carmen found the victim's file on her at Bank Bridge. She said she met Mikhail at one of her séances once, but she did not strike him as a spiritual person. According to her, the victim constantly was being an interruption, and hoped that now he is dead he would not make fun of the occult.

Sveta arrived at the station with news saying she had spoken with the victim and has case-breaking news. Since Sveta wished to do a séance, the player was accompanied by Marina to sit in on the séance. Once it began, Sveta had called the victim's spirit, who said he deserved to die and that his killer was not Sveta Rasputina. Marina put an end to it, exclaiming that Sveta could not have done a worse job at misdirecting their attention. Marina wondered if business with her was not good, Sveta replied saying it has not because the victim would not legalize her permit to become a professional psychic.

Despite her attempts to mislead the investigation, Sveta was found to be innocent after the team incarcerated Dmitri Lermontov for Mikhail's murder. 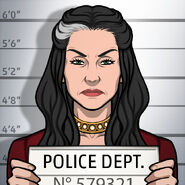 Sveta featuring in a "Caption the Scene" promo.
Add a photo to this gallery

Retrieved from "https://criminalcasegame.fandom.com/wiki/Sveta_Rasputina?oldid=475635"
Community content is available under CC-BY-SA unless otherwise noted.