Susie Pickley (also known as "Susie the Slayer") was the victim in Dead Girl Rolling (Case #4 of Pacific Bay).

Susie was a roller derby captain who sported black hair on a side ponytail over her left shoulder, a roller skating helmet, and a roller skating t-shirt, both sporting the colors of her team, "Helter Skaters". Prior to Susie's fame as "Susie the Slayer", she usually sported pink clothes, and a pair of monocles on her brown eyes plus a hairband at the right side of her head.

Amy and the player witnessed Susie's death at the roller skating rink along with Hannah. They sent her body to Roxie, who said that Susie died from an allergic reaction to the caffeine in her drink, which was laced with Rocket Cow (that tasted indistinguishable from her usual drink). Roxie also found a note in Susie's corpse telling the victim to take the drink, whose paper the team revealed to have come from a guitar tab, revealing that the killer played guitar.

Later on, Yann analyzed a crushed bottle containing traces of the energy drink that killed Susie at the skating rink with Susie's name on the bottle. Yann was able to determine the force of the crush by simulating the force required to crush the drink bottle, and thus deduced the killer weighed 132 pounds.

Susie was married to her high school sweetheart, Howard Pickley, who had encouraged her to take part in roller derby. However, Howard felt that Susie became so confident upon her entry into the scene that he thought she did not care about him anymore and so he took to taking explicit pictures of other roller derby girls. Howard's mother, Barbara Pickley, who was the victim's confidante, also felt she had changed upon her entry into roller derby, even suspecting her of cheating on Howard and hiring Becky Walden to spy on her under the false pretense of a social media award. Susie engaged in a roller derby rivalry with the Pacific Pixies team captain, Mona Middlefinger, who thought her too much of a newbie to feel threatened. Susie also slightly flirted with street performer Lenny Spitfire, who fell deeply in love with her.

The killer turned out to be Barbara.

Barbara claimed that Susie's entry into the roller derby scene led her to engage in activities against Barbara's moral compass. When she realized that Susie was flirting with Lenny Spitfire, she feared that Susie would leave Howard. She then resorted to lacing Susie's drink with Rocket Cow, which induced an anaphylactic shock in Susie. Judge Dante sentenced her to 25 years in jail. 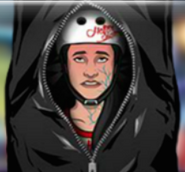 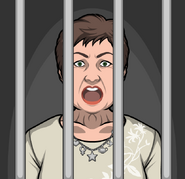 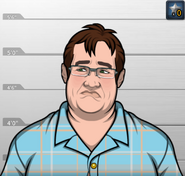 Susie (left) on the case's promotional flyer.
Add a photo to this gallery

Retrieved from "https://criminalcasegame.fandom.com/wiki/Susie_Pickley?oldid=458146"
Community content is available under CC-BY-SA unless otherwise noted.