Susanna Towers was a suspect in the murder investigation of stormchaser Peggy Pascal in The Eye of the Storm (Case #23 of Pacific Bay).

Susanna is a 25-year-old rescue worker in Jazz Town. She has dark skin, brown eyes and short black hair partly concealed underneath a white hard hat which has a paramedic logo in the middle. Below her left eye, she sports a beige bandage. She dons an orange raincoat with a yellow hoodie and the words "RESCUE" on it, with white stripes on the sleeves. It is known that Susanna has a cold, drinks tea and smokes.

Susanna was interrogated by the police for the first time after Amy and the player spotted a man-made hurricane petition flyer in the military bunker with her writing all over it. Hannah told the team by phone that Susanna was currently helping out people in Jazz Town's flooded areas.

Amy informed Susanna that she was angry at Peggy since she believed the nature of the note was intended to scare people away, in which Susanna did not like Peggy's storm chasing life whatsoever. Susanna wanted Peggy to teach her about hurricanes and how it was made but Peggy did not have time to teach other people—a feat which irritated Susanna since she billed Peggy as someone who wanted to hinder instead of help.

Peggy Pascal was right about Hurricanes Yves and Zelda after Amy and the player found out that those hurricanes were linked to Jazz Town's largest crime spree; Susanna was found innocent, but fell within Chief Marquez's radar when she was found to have trespassed military limits, thanks to a cigarette found to be hers courtesy of Yann's clinical analysis. All Susanna wanted to do was to bring sunny weather in time for the upcoming annual carnival, convincing the team that the weather machine could produce sun to turn things around. Since Colonel Spangler was the only person with full access to the machine, Amy and the player agreed to adhere to Susanna's pleas. Spangler required help from the team to recalibrate the antenna to bring sun to the carnival, which eventually eased up Susanna's job on the long run. 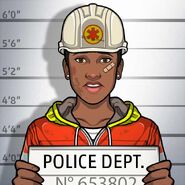 Retrieved from "https://criminalcasegame.fandom.com/wiki/Susanna_Towers?oldid=413819"
Community content is available under CC-BY-SA unless otherwise noted.