Susan Peck was a suspect in the murder investigation of intern Gail Harding in Innocence Lost (Case #19 of Grimsborough).

Susan is the 48-year-old owner of the Stone Cold Motel. She has neck-length blonde hair and green eyes. Susan is seen wearing a dark brown jacket over a light green-brown tartan flannel shirt. She sports red lipstick, a necklace around her neck, a cigarette sticking out of her mouth, and a green cap with two flowers designed on it. It is known that Susan uses cocaine.

When Jones and the player were searching the construction site, they found a torn card. After putting it back together, it was revealed to be a card of the Stone Cold Motel. On the card it was written "Room #9". So the team went to the motel, where they found Susan, who said that she was owner of the motel and told the team to search the room quickly since she was cleaning the place. The team then went to search Gail's motel room and found her purse and a credit card receipt. After searching the room, the team again went to Susan for knowing further details about the victim.

After Irina Phelps's indictment, Susan was suspected of dealing ecstasy during the Additional Investigation. When the team received information about Susan's ecstasy dealings, they went to her motel to ask her about it, but Susan denied. The team then checked the motel room, where they found fingerprints on a bag of ecstasy pills. They gave the bag to Alex, who then analyzed the fingerprints and told the team that the fingerprints belonged to Susan, who was arrested and impounded in jail for dealing ecstasy with some teenagers. 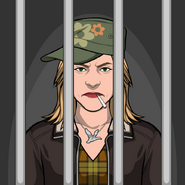 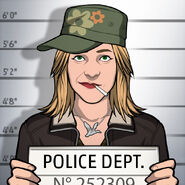 Retrieved from "https://criminalcasegame.fandom.com/wiki/Susan_Peck?oldid=499731"
Community content is available under CC-BY-SA unless otherwise noted.