Susan Etter was the killer of her brother, art instructor Paul Etter, in Gut Out (Case #7 of Supernatural Investigations).

Susan is a 54-year-old goat ranch owner and the sister of the victim. She has brown eyes and tied-back gray hair littered with straw. She has sunburn on her cheeks and sports turquoise earrings. She wears a Rio Grande striped shirt under a disheveled olive cardigan with the sleeves rolled up and littered with straw. Additionally, she is seen crutching a baby lamb with a pink collar to her body with her right arm. It is known that Susan speaks Spanish, eats cajeta and uses turpentine.

Susan became a suspect after Luke and the player found Paul's locket with a picture of him and Susan. Initially, she assumed that the team was there to investigate the livestock massacres. When Luke told her about the murder, she acted shocked that her brother had also fallen prey to the chupacabra. She then told the team that she was worried about the chupacabra coming for her and her goats next.

In the end, it was proven that Susan was Paul's killer. She admitted that she had found the chupacabra in her garden one night and raised it to attack the goats in all the competing farms in Taos Pueblo. With her own farm still failing, Susan asked Paul for financial aid, which he refused to give. She then trained the chupacabra to attack Paul and make it look accidental so she could collect his life insurance money. With the team recording Susan's confession, they turned her over to the police. 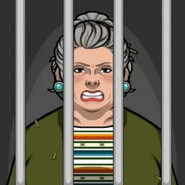 Susan, turned over to the police for the murder of Paul Etter. 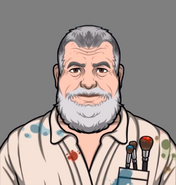 Retrieved from "https://criminalcasegame.fandom.com/wiki/Susan_Etter?oldid=523909"
Community content is available under CC-BY-SA unless otherwise noted.