Susan is a 31-year-old actress and comedienne.

In her first appearance, Susan has her black hair (possibly a wig) tucked under a witch hat adorned with a spider, donning a black dress with green on the shoulders and collar, not to mention a pair of white crescent earrings. She sports green bodypaint all over her and has blue make-up as well as an "ALL ACCESS" badge. It is known that Susan uses anti-aging cream and has read The Glass Princess.

In her second appearance, a bald-headed Susan is seen wearing blue makeup and a blue hooded cloak for her role in the upcoming movie Warzone Pacific. She is also seen sporting the badge of an infamous cult and has an acid burn. It is discovered that she uses talcum powder.

Susan found herself in trouble after Frank and the player found a promotional poster of the Glass Princess movie depicting the witch provoking a princess (Jenny), but not without Hannah confirming the witch's actress to be Susan. Frank sensed something snappy in the message written on the promotional poster, prompting a talk with the comedienne.

Susan told Frank and the player (in the movie set) that the message she wrote on the movie's promotional flyer was meant to be a joke as, like the actors and actresses who play antagonist roles, she would never get any recognition at all. Frank did not like what Susan was saying, but the actress did not want the team to think she was a bad person just because she portrayed an antagonist in a movie. Furthermore, Susan thought Jenny was trying to mix fiction with reality, in which witches were meant to be irredeemable antagonists.

Afterwards, Susan had to approach Frank and the player in the police station since parents of children who were fans of The Glass Princess wanted to off her due to those parents at the Mr Sparkles toy shop deducing Susan to be Jenny's killer. Frank told Susan to remain in the interrogation room while he and the player took a second look in the Mr Sparkles toy shop, and following the trip, she was ready for a second conversation.

Susan requested the studio to change the ending, but the studio refused. She claimed that Mr Sparkles, the production company of The Glass Princess, had a black and white morality trope in which antagonists were meant to be irredeemable—a fear Susan had given she played an antagonist in a Mr Sparkles project. Susan further informed Frank and the player that she's actually a nice person in spite of the antagonist roles she played in various movie projects—suggesting that the actress was now starting to get sick and tired of playing antagonist roles.

Susan was found innocent in spite of her antagonist role as a witch when an inferiority complex was unearthed as the murdering reason.

Susan was flagged as a suspect once more when Amy and the player found a contract between the Utopian cult and Susan, in which the latter was to be given a supporting role in Warzone Pacific. When asked about the contract, Susan claimed that she had wanted to work with Rex Logan for a long time. However, the producers did not accept her due to her not being a Utopian, thus the actress decided to join the cult. She was thrilled to be playing the part of a kind alien woman rather than a villain, thanks to the cult's influence, though she expressed her sadness of Rex's death, saying that he was charming with her on set.

Susan was questioned again when the player recovered Rex's message on her script, signifying that the two actors were close. The actress told the team that she and the victim were close friends for years and that Rex gave her her first break in Ivywood. Since then, she had tried to stay close to Rex and became a Utopian for him. After becoming part of the cult, Susan finally got to work on the same film as Rex, as she thought it would never happen. Susan then mourned for the loss of her friend, saying she was all alone.

Susan was ultimately found innocent after a wanton need to shine in fame turned out to be the reason for murder, but required the team's help at Studio 51 when she was being continuously threatened by someone anonymous. So Amy and the player did not hesitate to investigate the studio once again, thus finding an anonymous threat letter addressed to Susan.

After tedious hours of analysis, Russell deduced that the letter was sent to Susan by none other than the Utopians, in spite of the actress being a recent member of the infamous cult. This prompted Russell and the player to rush to Susan only to find her brainwashed; this marked the third time someone was found brainwashed in the exact manner, as a similar scenario was witnessed twice before the events of this case. The actress was evidently brainwashed by the Utopians—who were currently under allegations of a brainwashing scheme—to ensure she would not leave the cult under any circumstances. Russell thus promised to get to the bottom of the brainwashing fiasco and stop it at all costs. 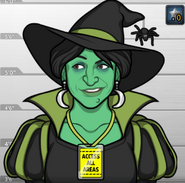 Susan, as she appeared in Once Upon a Crime (Case #32 of Pacific Bay). 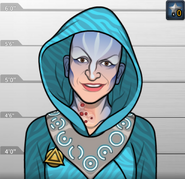 Susan, as she appeared in Star Crime (Case #35 of Pacific Bay). 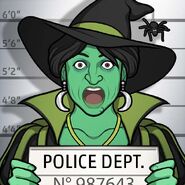 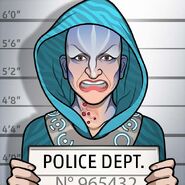 Susan featuring in a promotional image of Dead Carpet.
Add a photo to this gallery

Retrieved from "https://criminalcasegame.fandom.com/wiki/Susan_Blair?oldid=468588"
Community content is available under CC-BY-SA unless otherwise noted.