Sunny was a suspect in the murder investigation of Mayor Annette Arbor in Uncivil Rights (Case #47 of Pacific Bay).

Sunny is a robot built four years ago that works at the android graveyard. He has extra arms for the purpose of carrying more tools and has an oil stain on his chest. It is known that Sunny knows mechanics.

Frank and the player first talked to Sunny after finding a medal awarded to him in the mayor's office. He said he loved the mayor because of her campaign for robots' rights, but was surprised to hear of her death. Sunny was worried that now that the mayor was dead, that violence would happen. Frank assumed it was a threat from Sunny, but the latter said it was humans that they needed to worry about.

Sunny was interrogated again once the team found a file saying that Sunny was a threat. When they talked to him about the file, he said the victim was not helping robots fast enough to and he wanted to help. Frank said Sunny was ungrateful and that the mayor was doing her best to make people accept them. However, Sunny believed robots should have more rights such as holidays, minimum wage, and health insurance. He went on to say that robots would become citizens and that they were here to stay.

Sunny was cleared of all charges for the mayor's murder after the team incarcerated Larry Newark, but he still needed help from the team. However, Frank did not want to help, so the player received aid from Hannah. Sunny needed help finding his friend, a plant, and due to undergoing maintenance he could not remember where he put it. Hannah was surprised to hear that Sunny had a potted plant as a friend, so she and the player left to search in the android graveyard. After finding it and returning it to Sunny, Hannah offered to help with Sunny's memory problems, but he declined. He explained he could talk to the plant and thanked the player for finding it. 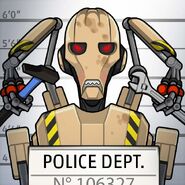 Retrieved from "https://criminalcasegame.fandom.com/wiki/Sunny?oldid=518722"
Community content is available under CC-BY-SA unless otherwise noted.