Suleiman is the 31-year-old Sultan of the Ottoman Empire in 1515. He has black eyes, brown hair and long, brown facial hair. He wears a red, brown, and white kaftan with elaborate patterns on the sleeves and down the center of the garment. He also wears a white turban with red fabric attached at the back, over which there is an elaborate golden headpiece adorned with rubies and feathers rests. He also wears two ruby rings on his right hand. It is known that Suleiman eats stuffed melon, uses rosewater and reads Firuzi.

Suleiman became a suspect after Nebet and the player tracked him down to the palace's library. He informed the team that the victim was his oldest friend and his greatest confidant. When asked who could have wanted him dead, he revealed that he had shared many enemies with Ibrahim due to their power.

Suleiman was spoken to again about the victim's attempt to betray him. He informed the team that he knew that Ibrahim was a traitor as he wanted to become the sultan in his stead. He admitted to planning to punish the victim for his betrayal, but he had not killed him.

Suleiman was found to be innocent after the team incarcerated Serap for Ibrahim's murder. The team presented Serap to him, who banished her from the Ottoman Empire for two years, but allowed his concubine Roxelana to bid her farewell. Later, Penelope asked the team to help clear musketeer Alexandre Devereaux's name when Suleiman accused him of stealing his Halime stone. After they found the stone, Jack and the player returned the jewel to him. They explained that the jewel had been found at the thermal baths and that it had been simply misplaced. He then ordered Devereaux's release. 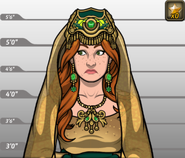