Sue is a 45-year-old Chinese marketplace administrator and leader of the Chinese community in Inner City. She has brown eyes and shoulder-length black hair. She dons a red jacket with a pattern of coins and stars and a blue cheongsam underneath.

In her first appearance, it is known that Sue smokes shisha pipe, uses bathing salts and reads the Daily Dawn.

In her second appearance, it is discovered that she gets manicures.

In her third appearance, Sue sports a burn mark under her right eye. It is revealed that she is right-handed, had an organ transplant and speaks Chinese.

Sue was called into interrogation when the team found a broken Chinese vase pieced back together and verified by Hannah as Sue being the one presenting that vase per the wedding gift registry. Sue told the team Radovan was generous enough to invite her to the wedding, so she thought a Chinese vase would be fitting. Frank thought Sue was the type of person to turn the Serbian community against the Russian community but Sue countered that she saw herself as a business person, doing business deals rather than promoting the current Russo-Chinese feud.

Sue was approached by the team a second time when the player found a sales agreement between Sue and Radovan regarding ownership of the Pipe Dreams Shisha Shop during a second trip to the Body & Beauty Hammam & Spa. Sue was aghast since the team assumed she coerced Radovan to sell Pipe Dreams to her but Frank wanted to dig deeper into the mystery since the sale price was only $5000 USD for a business. Sue told the team that Radovan was not willing to own and operate Pipe Dreams during the Russo-Chinese feud and even told the team Radovan gifted a shisha pipe to Sue as gratitude for purchasing Pipe Dreams from Radovan, which flagged her as someone who smoked shisha pipes. Sue did not believe in war, but instead believed in cultural exchanges to make ends meet.

Sue was found innocent when Tom Zhang was incarcerated of grand homicide, but was caught in the middle of Inner Chaos' anarchist campaign during the hours after the case was closed.

Sue was called into the investigation of Odette Kamarov (Nikolai Kamarov's wife) when the team found Sun Tzu's The Art of War in the Inner City playground, in which Hannah matched the stamp to the file the police have on Sue's name. Amy and the player informed the book was found at the same place where Andrew Kamarov was abducted but also told Sue that Odette was dead as well. Sue stated she was not concerned about the Russian community, although an abduction linked to Odette's murder was a serious matter to the team.

Sue was caught in the middle of Nikolai's mental instability when Chief Marquez directed the team to the playground where Sue was kidnapped and held hostage by him (as she went for a manicure). Amy warned Nikolai not to try a single act of violence and to let Sue go since there was currently no hard evidence that Sue was guilty of grand abduction and homicide based on police findings. Sue and Nikolai argued but because of Nikolai acting on vigilance and making wrong accusations, Amy considered Nikolai a serious suspect and locked him up for the time being. Sue believed Nikolai orchestrated her kidnap to blame the Chinese alas describing the blame on him for starting a Russo-Chinese feud in the first place, although Amy refused to believe that Nikolai would kill his own wife to trigger a Russo-Chinese feud.

Sue was found innocent when Tammy Baker was found guilty of Andrew's abduction, grand homicide, and for unlawful use of a controlled prescription.

Sue was in serious trouble immediately after Nikolai was paraded skinless on Chinese territory as the player and Frank knew she was noted in the Chinese community as its de facto leader. Sue told the team that neither did she have anything to do with Nikolai nor she would willfully taint Chinese pride through fatal force against Nikolai on Chinese grounds. However, she did admit she felt Nikolai became dangerous due to his mental instability during his wife Odette's murder investigation. Sue willfully permitted the team to take a look around the Chinese temple she furnished for the Chinese community, allowing the team to continue their murder investigation of Nikolai Kamarov.

Chief Marquez told Frank and the player to head back to Sue's headquarters after receiving intel about Sue's disappearance. At the temple, Frank and the player found clues that they overlooked during the team's first trip to the Chinese temple—including but not limited to a picture of Nikolai with a baby two decades before the case took place and an origami with an encrypted code key allowing the player to discover Sergei Yablokov's plea to ask the Chinese community to stop the feud for financial purposes for the least. Sue was not found much to Chief Marquez's expectations, though.

Russell found out that the motive for Kamarov's murder was to get half of his skin, but realized the killer wanted to get half of Sue's skin to unite the communities—prompting Frank and the player to rescue Sue as her being missing was now being flagged as an abduction by the killer so Frank and the player hurried to the killer's hideout and found Sue blindfolded but unscathed (although she had a scratch on her forehead). The player took some time to get any clues needed to finish incriminating the killer, and afterwards Sue told the team she was blindfolded as she was abducted, so she could not see who her abductor was. The killer tried to touch an old scar she had from a long time ago and as the killer tried to kill Sue the same way they killed Kamarov. She knocked the scalpel out of the killer's hand and kept it so she would allow the team to retain the surgical device as the murder tool used to kill Kamarov. Yann determined that a male used the evidence Sue cooperatively gave to the team to skin Kamarov to death. Due to this, Sue played an integral part to bring Rupert Snow (coincidentally her illegitimate son) to justice.

Sue was hit hard by James Toussaint and his rattle, but she retained him in the Chinese temple as she had no idea who his parents were, who later on turned out to be Yann and Jessica Toussaint. Moments after Yann and James were reunited (with Sergei retaining James in a safe fashion,) Sue went with Sergei to Nikolai's funeral in order to end the Russo-Chinese feud for good. 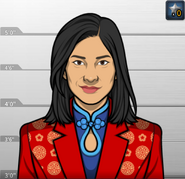 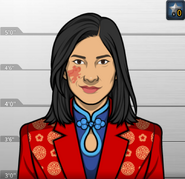 Sue, as she appeared in Under the Skin (Case #17 of Pacific Bay). 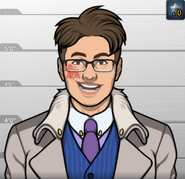 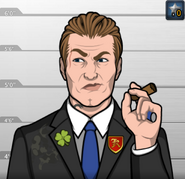 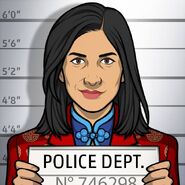 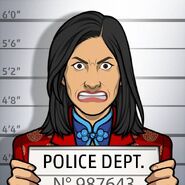 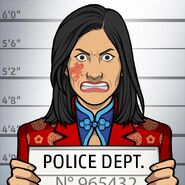 Retrieved from "https://criminalcasegame.fandom.com/wiki/Sue_Xiong?oldid=493041"
Community content is available under CC-BY-SA unless otherwise noted.