General Subutai (Mon: ᠰᠦ᠋ᠪᠦᠭᠠᠳᠡᠢ) was a suspect in the murder investigations of his eldest wife, Tangzi Khatun, in Fountain of Death (Case #27 of Travel in Time) and explorer Santiago Sanchez in The Wrath of Khan (Case #30 of Travel in Time).

Subutai is a 45-year-old Mongol general. He has long black hair tied with white string into two loop-shaped bundles, a mustache and a vertical scar across his right eye. He wears a cobalt blue kimono with gold lining and gold designs over maroon sleeves. He also wears a brown belt.

In his first appearance, it is known that Subutai eats boodog, knows calligraphy and rides horses.

In his second appearance, it is discovered that he is fit, bites his nails and uses cinnabar.

Subutai became a suspect after Jack and the player discovered that he was the victim's husband. After he told the team that he had a harem of wives, Jack described the victim, prompting Subutai to identify the victim as his eldest wife. He revealed that his family had access to the palace and often spent time in the throne room with the Great Khan. When Jack mentioned that they needed to speak to the Khan, Subutai promised that he would introduce them to him if they solved the murder.

Subutai was spoken to again about his sword being at the crime scene. He revealed that he had given his sword to his wife to use when he was away. He claimed that his wife was very skilled with a sword and then berated the team for disturbing him again.

Subutai was found to be innocent after the team incarcerated Ayanchin for Tangzi's murder. Later, Subutai fulfilled his promise and brought the team before the Great Khan. However, midway through the team's meeting with the Khan, Subutai interrupted them and revealed that the Khan's daughter, Princess Torgoljin, had been kidnapped.

After presenting the Khan with evidence that his daughter had been kidnapped by the Chinese, Jack and the player spoke with Subutai to discuss their strategy in rescuing her. After they told him that the kidnappers came from Xiangyang, Subutai told them that they needed to arrive in the city with an air of diplomacy.

Subutai became a suspect again after he demanded that Jack and the player explained the murder to him. He revealed that the Great Khan held secret meetings with the victim that he, his most trusted general, was excluded from. He then expressed his worry that the Khan would launch the attack before their troops were ready out of anger.

Subutai was spoken to again about his anger toward the victim. He revealed that Santiago used to fill the Khan's head with tales of faraway lands, making the Khan fantasize about invading them, resulting in more leg work for Subutai. Stressed out, he threatened Santiago that the Mongols would invade Spain if he did not pipe down.

Subutai was found to be innocent again after the team incarcerated Ammon Bast for Santiago's murder. Later, Jack and the player, under orders from Shogun Tokiko Gojo, spoke with Subutai to trick him into using neutralized gunpowder in order to give China and Japan a fighting chance against the Mongols. Subutai told the team that their gunpowder had disappeared, but Jack said that it had only been misplaced, taking the opportunity to give him the neutralized gunpowder. Subutai then thanked the player for their help and urged them to get to safety. 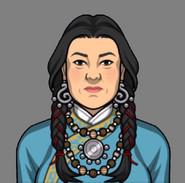 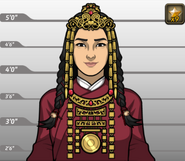 Yangdai Khatun, Subutai's wife.
Add a photo to this gallery

Retrieved from "https://criminalcasegame.fandom.com/wiki/Subutai?oldid=506597"
Community content is available under CC-BY-SA unless otherwise noted.