Steven Hwang was a suspect in the murder investigation of his wife, Deputy Mayor Sandra Hwang, in The Heart of the Matter (Case #42 of Mysteries of the Past).

Steven is the 50-year-old husband of the victim. He has graying black hair and dons a black coat over a blue waistcoat and white shirt with a green bowtie. He also has red scratches on his left cheek. It is known that Steven drinks sangria, reads Edgar Allan Poe and knows clockworks.

Steven became a suspect after Isaac and the player found his wife's body in her study. He was in disbelief at her murder, wondering who could have done such a thing. He told the team that the victim was at a party at Duophol Mansion, and that he didn't go with her because he didn't like big functions. He then explained that after Sandra returned home, she hid herself away in her study.

Steven was spoken to again about a porcelain angel that had been thrown in the trash. He revealed that it was their twentieth wedding anniversary, and that he had planned a fancy dinner for her. However, she went to the party to advance her career instead, leaving him feeling emasculated.

Steven was found to be innocent after the team incarcerated Larry Rochester for Sandra's murder. But he later grabbed the team's attention with his ravings about sorcery playing a part in his wife's murder. He accused the Rochesters of being in league with the devil, and that Larry had stolen Sandra's heart to appease the demons they worked for. He then urged the team to look around the study to find a trace of their allegiance to the devil. 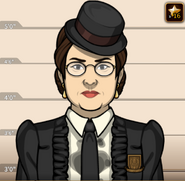 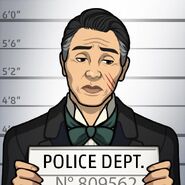 Retrieved from "https://criminalcasegame.fandom.com/wiki/Steven_Hwang?oldid=415416"
Community content is available under CC-BY-SA unless otherwise noted.