Steve Srebnik (Srb: Стив Сребник) was a suspect in the murder investigation of his father-in-law, shop owner Radovan Radich, in Eastern Promises (Case #13 of Pacific Bay).

Steve is the 25-year-old son-in-law of the victim. He has brown hair and a light stubble. He also wears a black turban on his head. For clothing, he wears a long white tunic shirt with red and blue designs and a red jelek with yellow designs. Besides that, it is seen that he is wearing a small gold earring on his left ear. It is known that Steve smokes shisha pipe, uses bathing salts and reads the Daily Dawn.

Steve Srebnik yearned to marry Manka Radich, whom he addressed as the love of his life.

Steve was called into investigation when the team found a dating agency flyer revealing to be Steve wanting to find a date, in which Steve said that Radovan signed Steve up for the dating agency behind his back to ensure he would not have his way with Manka. Radovan never liked Steve and wanted Steve to marry someone other than his daughter and felt Radovan was the only one preventing him from having his way with Manka, but Steve said nothing was worth killing because he clearly stated that Radovan was protective of Manka, feeling that Manka deserved someone else other than Steve. Frank told Steve to keep the dating agency flyer just in case things with Manka didn't work.

Judge Dante (much to Frank's surprise) politely asked the team to intervene with Steve in which Judge Dante made it clear that he does not do divorce cases, but instead tries suspects for homicides, in which Frank reluctantly agreed to pursue a second discussion with Steve. Frank demanded reasons for Steve's sudden divorce as Manka's nagging was what triggered the sudden divorce. Manka was powerless when it came to Radovan's decision to invite members of the Chinese community to the Srebnik wedding as Steve stated the Serbian community would be in the red if Radovan invited the Chinese to the Srebnik wedding--grounds for Frank flagging Steve's thoughts as a murder reason. Steve was angry because Radovan had "Eastern Promises" alongside Manka (as Manka was willing to have some people of the Chinese community in her wedding) so while he wanted to divorce Manka because of what Radovan did to put the Serbian community in the red (inviting the Chinese community to a Serbian wedding whilst the Serbian community was affiliated with the Russian community), Steve didn't believe in murder because of such violations to Serbian traditions.

Steve was innocent (alongside Manka) when the killer was incriminated and found guilty of grand homicide. 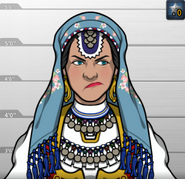 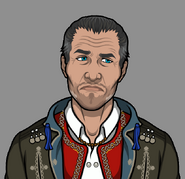 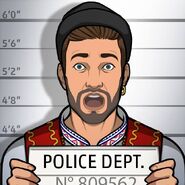 Retrieved from "https://criminalcasegame.fandom.com/wiki/Steve_Srebnik?oldid=415687"
Community content is available under CC-BY-SA unless otherwise noted.