Steve Roy was a suspect in the murder investigation of historian Reggie Liotta in Writer's Blocked (Case #21 of The Conspiracy).

Steve is the 43-year-old publisher of Xerda's Return. He has black hair and black eyes hidden behind a pair of black glasses. He wears a brown tweed blazer over a dark green cardigan. He is also seen holding an iPear phone. It is known that Steve uses hand sanitizer, knows Xerdan language and is a member of the Historical Society.

Steve became a suspect after Gloria and the player learned that he was the victim's publisher. He informed them that he was so honored that the victim had chosen him as his publisher and that the public was eagerly awaiting "Xerda's Return".

Steve was spoken to again about him taking advantage of the victim's murder. He told them that publishing was a cutthroat industry and that Reggie's murder would make "Xerda's Return" a best-seller. Gloria then implied that he had killed Reggie for the opportunity, which Steve retorted.

Steve was found to be innocent after the team incarcerated Jebediah Cobb for Reggie's murder. But he was later informed about Ray Parker's presentation by Jones and the player, which he approved of. 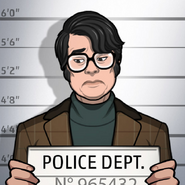 Retrieved from "https://criminalcasegame.fandom.com/wiki/Steve_Roy?oldid=408895"
Community content is available under CC-BY-SA unless otherwise noted.