Steve Bundy was the killer of banker Coleen Truman in Easy Prey (Case #7 of Pacific Bay).

Steve is a 45-year-old construction worker who has brown hair with gray streaks at the end of his hair and sports blue eyes. Over his green Hawaiian shirt and white undershirt, he wears a yellow construction worker vest with a chest pocket on the left side of his vest containing a pen, a screwdriver and a hammer. It is known that Steve drinks rum and practices rifle shooting.

Amy and the player called Steve into interrogation in front of the swamp estates of Bayou Bleu when they found a newspaper article in front of Shelly Dulard's steamboat announcing Steve as Coleen's construction aide for the Gator Land project in spite of the purchase not completed yet. Steve told the team he was happy about the Bay Area Bank investing in Gator Land with interest in investing in the abandoned property. While Steve was proud of Bay Area Bank investing in Gator Land, he was not happy when his job was in jeopardy due to Coleen's death and that Alec Howard was reluctant in giving up the property.

Later on, Hannah analyzed the Gator Land blueprints the team found in the second trip to Shelly's steamboat and deduced that the Bay Area Bank wanted to purchase Gator Land, demolish it, and transform it into a Kauf Mart shopping mall, prompting the team to talk to Steve a second time. Steve was shocked to fall for Bay Area Bank's lies when Amy told Steve about what Bay Area Bank's intentions for Gator Land were, and admitted to the team that he would walk out of the job to avoid building such shopping mall.

It was later revealed that Steve was responsible for the murder of Coleen Truman. Steve killed Coleen because he thought Coleen was going to buy Gator Land to turn into it's former glory, but Steve found out Coleen was going to turn Gator Land into a shopping mall. Steve tried to convince Coleen, but she zapped him with her taser. This angered Steve, so he brought his hunting rifle and shot Coleen in her stomach. Judge Dante sentenced Steve to life in prison. 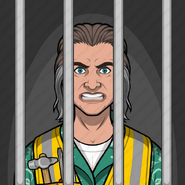 Steve, sentenced to life in jail for the murder of Coleen Truman. 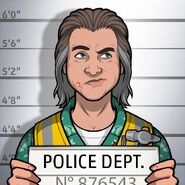 Retrieved from "https://criminalcasegame.fandom.com/wiki/Steve_Bundy?oldid=408878"
Community content is available under CC-BY-SA unless otherwise noted.