Stephanie Griff was the victim in Game, Set, Murder (Case #40 of The Conspiracy).

Stephanie was a tennis player and a student at Grimsborough University. She had long black hair tied back in a ponytail and blue eyes. At the time of her death, she wore a green Grimsborough University athlete shirt with a black stripe and white lining, blue denim jeans and white trainers. Additionally, she sported a silver necklace. It is known that Stephanie was allergic to heat cream.

Stephanie's body was found in one of the university's workshops, her head crushed in a vise. Martine confirmed that the vise was the murder weapon and, despite the killer having knocked her unconscious prior to the murder, the increasing pressure and pain from the vise would have woken her up. Martine found traces of heat cream on Stephanie's wrists where the killer had restrained her with zip ties. Since the heat cream had given Stephanie an allergic reaction, Martine deduced that the heat cream must have come from her killer, allowing her to conclude that the killer used heat cream.

Stephanie was at the university for a tennis scholarship. Stephanie had urged her doubles partner John McKenzie to take steroids before a match, but he refused, fearing that they would lose their scholarships. Stephanie bossed around landscaper Gunnar Burns to set up the tennis court at any hour she wanted, tiring him out. Stephanie was required to attend Bradley Fields' woodworking class, but she was so inattentive in class that Bradley had to permanently injure his own hands to save her hands from a running mill press she was using. Stephanie was interviewed by behavioral science student Lucius Roth in his study drawing parallels between athleticism and human survival instinct. Stephanie got into a relationship with Miranda Cohen after booking her taxi multiple times. According to Miranda, their sexual life was "very adventurous".

The killer turned out to be Gunnar.

Upon admitting to the murder, Gunnar said that he killed Stephanie while torturing her by knocking her unconscious and slowly crushing her head with the vise to reveal "what she knew." However, he stopped himself from giving any more information. Judge Powell then sentenced him to life in prison without possibility of parole.

After the trial, Jones and the player discovered that Stephanie had taken a picture of Gunnar digging up at the court late at night. After further investigation, the team found out that Gunnar had been burying the body of Clara Burns, his ex-wife whom he murdered and buried in his backyard over 20 years ago after she had taken everything from him during their divorce. Gunnar said that he was forced to relocate her body to the court after the local council asked to dig up at his backyard to install some Internet cables. While digging at the court under the guise of resurfacing however, Stephanie caught him in the act, taking a picture in the process. 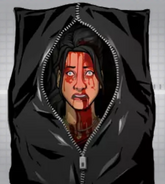 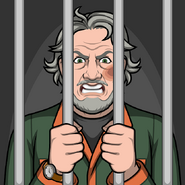 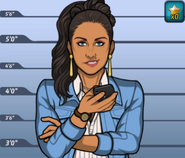 Miranda Cohen, Stephanie's girlfriend.
Add a photo to this gallery

Retrieved from "https://criminalcasegame.fandom.com/wiki/Stephanie_Griff?oldid=470067"
Community content is available under CC-BY-SA unless otherwise noted.